On the occasion of the 153rd birth anniversary of Mahatma Gandhi, Sawant offered floral tributes at Gandhi's statue in north Goa.

Union Minister of State for Tourism and Ports Shripad Naik, Cumbarjua MLA Rajesh Faldessai, Santa Cruz MLA Rodolfo Fernandes and others were present on the occasion.

The Chief Minister said that all efforts are underway to undertake development through the Central and state governments. 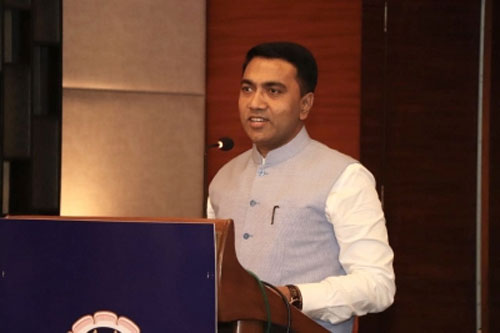 He said that the government is making every effort to turn Goa into 'Swayampurna' and he is confident the day is not far to achieve.

"Mahatma Gandhi sacrificed everything to win India's independence. His numerous agitations against British rule in India, including the Non-Cooperation Movement, Dandi Yatra, Salt March, Quit India Campaign, Civil Disobedience campaign, etc., not only helped to make India independent but also propelled him to a position of leadership throughout the world. This is a result of his self-assurance and tenacity," he added.

Sawant said that in addition to his contribution to the freedom struggle, Gandhi also raised concerns about social issues.

"He always emphasised the need for the social, political and fundamental advancement of society from the perspective of self-reliance and brotherhood," he stated.

"We can't expect others to bring the change but need to shoulder it as our responsibilities," the Chief Minister said.