Ghaziabad, Nov 14 (IANS): A woman and her paramour were arrested here on Monday after the skeletal remains of her husband, who was missing for the last four years, were dug up from the premises of her boyfriend's home, the police said.

The arrested individuals have been identified as Savita and Arun. The skeletal remains have been sent for postmortem and DNA test. 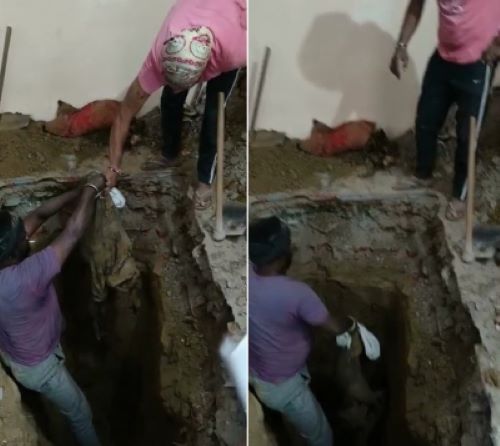 During questioning, Arun told the police that he has been in a relationship with Savita since 2017. Her husband Chandravir had seen both of them in objectionable positions on several occasions. Following that, there was tension in the marital life of Chandravir and Savita.

Arun told the police that Savita was also physically assaulted by her husband over their illicit relation. He also said that a 6-feet pit was dug at his house before killing Chandaravir.

On September 28, 2018, after Chandravir came home drunk and dozed off, Savita dialled Arun and called him to their place.

Chandravir was shot on the head by Arun, after which he chopped his hand off with an axe and dumped the limb in a forested area.

Finally, he buried Chandravir's body at his home in the 6-feet pit that was dug earlier, and covered it with cement.

Earlier, the police could not find any clue during the investigation after a complaint was registered mentioning that Chandravir -- a resident of Sikrod village in Ghaziabad -- was missing.

The had also police submitted their final report to the court.

However, the Ghaziabad SSP later re-opened some unsolved cases and files were assigned to different teams.

The Crime Branch, while working on Chandravir's case, reached out to his daughter to collect more information on the matter. The daughter told the police that "a neighbouring uncle frequently visits our home". She also expressed her suspicion on that individual.

The Crime Branch eventually apprehended two neighbours -- Arun and Anil. During questioning, Anil revealed in detail that the entire planning was done before the execution of the crime.