Aizawl, Nov 15 (IANS): At least 15 people were feared dead when a large portion of a stone quarry collapsed and fell on them at Maudarh in Mizoram's Hnahthial district on Monday, officials said.

An official of the Mizoram Disaster Management and Rehabilitation Department said that a huge portion of a stone quarry of a private company suddenly collapsed when the workers were working in the stone pit.

No bodies could be retrieved till late Monday night even as rescue operations by various agencies were underway. 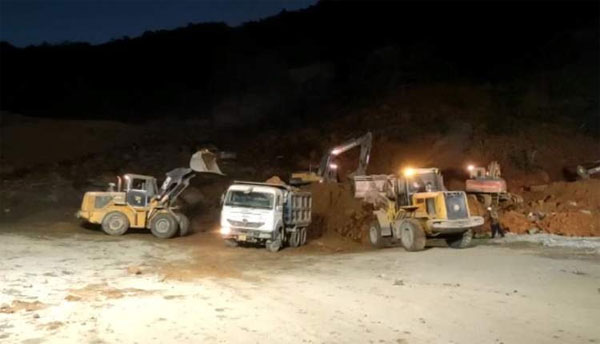 According to some villagers of the area, the mishap had happened after the workers returned from their lunch break.

Hnahthial district's Additional Superintendent of Police Vijoy Gurung quoting a contractor who looks into the work at the quarry said that 12 people may have already died.

"However, the exact number of deaths would be known after the completion of the search and rescue operation," Gurung told IANS.

Meanwhile, the Disaster Management official said they are yet to get a detailed report from the Deputy Commissioner of the Hnahthial district but he was told that five excavators and other drilling machines have been buried in the quarry.

Another official said that the labourers are mostly from outside Mizoram.

The stone quarry, located about 160 km from Aizawl, has been operational for two-and-a-half years.

A private company which is constructing a highway between Hnahthial and Dawn village collects stones from the quarry.