New group emerging within Kerala Cong with Tharoor as its leader

Thiruvananthapuram, Nov 20 (IANS): Veteran Congress leader Shashi Tharoor, who had received a drubbing in the AICC presidential polls, is now trying to emerge himself as a new power centre in Kerala's Congress party.

As part of this move, Tharoor has commenced a whirlwind tour of North Kerala with a section of Congress leadership supporting his initiative. Tharoor, who has never been given any mantle of responsibility in the organisational hierarchy of state Congress, has received the support of Kozhikode MP, M.K. Raghavan who is also not in the good books of the state leadership. 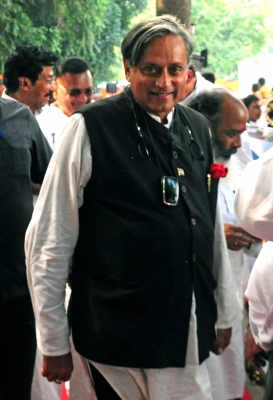 Tharoor, a three-term MP from Thiruvananthapuram Lok sabha constituency, has been receiving flak from the local Congressmen due to his unavailability in the routine party affairs, leaving much of the communication to his team.

With the state Congress slowly showing a revival after the heavy loss it faced in the 2021 assembly elections, a group of leaders led by M.K. Raghavan is trying to catapult Tharoor into the top position if the party comes back to power in the 2026 assembly polls.

Tharoor is trying to get the blessings of Indian Union Muslim League (IUML), the powerful political party in Kerala, aligned to the Congress and will be meeting the supreme leader of the party, Syed Sadikali Shihab Thangal, who is the state president of the party.

Muslim League is the second largest party in the United Democratic Front (UDF) after the Congress party. While Congress has 21 seats, Muslim League won 15 seats in a total of 41 seats for the opposition UDF.

Interestingly, Tharoor received a red flag in Kozhikode when the district Youth Congress committee backed out from his seminar against the Sangh Parivar.

In a similar vein, Congress Kannur district Committee also distanced itself from Tharoor. While Tharoor is trying to push himself and project himself as the top leader of the party in the state Congress, grass-root leaders and District Congress Committees are not amused by his move.

M.K. Raghavan had won three consecutive Lok Sabha elections from the Kozhikode constituency, yet he is considered a lightweight in state Congress and his support base will not do much good for Tharoor in North Kerala if leaders like KPCC president, K. Sudhakaran and former president Mullapally Ramachandran do not throw their weight behind him.

Even as most of the state Congress leaders are shying away from Tharoor, the three-term MP is aiming at the educated middle class to support him and to get ample of media support in the state to catapult himself in the big league.

However with K.C. Venugopal, as the powerful organising secretary of the AICC and close to Gandhi family, it has to be seen as to how far Tharoor will be able to move ahead in the Congress' organisational hierarchy.

Meanwhile, after reports of several DCCs keeping a distance from Tharoor's North Kerala tour, the AICC has clarified that it had not given any directive to the district Congress committees to refrain from participating in Tharoor's function.

Tharoor, the former United Nations senior official and three-time Lok Sabha Member from the state capital, has a dedicated fan following in the educated middle class who feels that a leader like him with his vast international exposure will be an answer to the Communist hegemony in state politics.

Dr Santhosh Nair, paediatric surgeon, Kannur, pointed out in a conversation with IANS: "What is the inadequacy for a well-read, well-educated person like Dr Shashi Tharoor who has proved his mettle winning back-to-back elections to Lok Sabha to become the Chief Minister of Kerala. He is the best bet for the Congress party at this juncture to revive itself from the dip it has gone into."

Dr Nair added: "Any right-thinking Keralite would vouch for Dr. Tharoor as we can easily resonate with him. The educated middle-class professionals want a highly reputed and educated individual as our Chief Minister and it is better if the Congress party projects him as their next leader."

Senior Congress leader and former minister Pandalam Sudhakaran, however, said: "Shashi Tharoor is a celebrity who has a global footprint. Still, any leader or cadre has to play within the ring set by the democratic Congress party and is someone is moving individually, then it's not good."

He added: "Tharoor may be having a fan club in state but that fan club is not a votebank and everybody should be under the party hierarchy for catapulting to the big league and individual forays are not accepted."

Title: New group emerging within Kerala Cong with Tharoor as its leader