New Delhi, Nov 22 (IANS): Qatar inviting controversial Islamic preacher Zakir Naik to give religious lectures during the ongoing FIFA World Cup in Doha has not gone down well with many people in India.

Naik, who is currently in exile in Malaysia since 2017, has been charged in India with hate speech, promoting enmity between groups and money laundering.

"They share his venomous and violent version of Islam, such perverts damage their respective religions. Terrible decision of the Qatar regime, its FIFA World Cup not an 'Ijtima' where Zakir Naik may be asked to speak. Even there he shouldn't be invited," noted historian Ifran Habib tweeted. 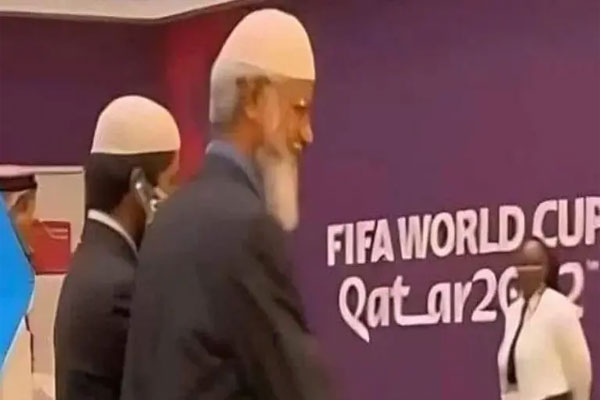 Naik's arrival in Qatar was announced on Twitter by Faisal Alhajri, a host for Qatar's state-run sports network Alkass.

"Preacher Sheikh Zakir Naik is present in Qatar during the World Cup and will give many religious lectures throughout the tournament," Al Arabiya News quoted Faisal Alhajri as saying on Twitter on Saturday.

On Sunday, a popular Twitter user by the name of @KawuGarba posted a video of Naik proselytising on stage. He could be seen directing the new converts to recite the 'Kalma' in the video.

"They came to watch the 2022 FIFA World Cup in Qatar. After listening to the call of Allah, they converted to Islam. Allahu Akhbar!" the user tweeted.

In March this year, the Ministry of Home Affairs (MHA) had declared Islamic Research Foundation (IRF), which was founded by Naik, an unlawful association and banned it for five years.

The MHA notification stated that the speeches made by Naik were objectionable as he had been extolling known terrorists.

The notification added that the IRF founder had also been promoting forcible conversion of the youth to Islam, justifying suicide bombings, and posting objectionable comments against Hindus, Hindu Gods and other religions.