Elaborate arrangements have been made to prevent the Kannada activists -- planning a protest in Belagavi against Maharashtra ministers' proposed visit, from entering the district on Tuesday. 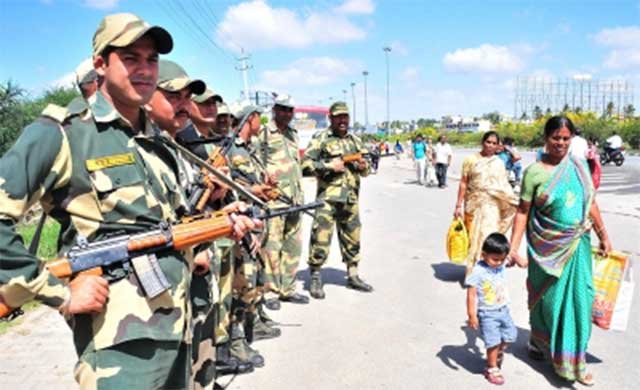 The Karnataka Rakshana Vedike organisation had organised a rally in the Channamma circle of Belagavi in the backdrop of Maharashtra ministers' visit. However, the police personnel were deputed at Hirebagewadi check post to prevent the entry of Kannada activists coming from various districts of the state.

Security has also been tightened at all entry points to Belagavi from Maharashtra state.

Meanwhile, the statement of the Maharashtra minister Shambhuraj Desai that he is going to visit Karnataka in coming days has again stirred a controversy.

Reacting to the statement, Karnataka Rakshana Vedike President T.A. Narayana Gowda stated on Tuesday that he is on his way to Belagavi with thousands of Kannada activists. "Not only today, whenever in future, Maharashtra ministers will not be allowed to step inside Karnataka. In case the district administration fails to prevent their entry, we will stop them."

Maharashtra Ekikarana Samithi A(MES) and Shiv Sena have been issuing statements for many years. No matter what happens, they will not be let inside the state's territory, he added.

No one is welcoming Maharashtra ministers in Karnataka. They will create a rift between Kannada and Marathi speaking people. They are acting like terrorists and creating law and order crisis in Karnataka. "We will not hesitate to ensure proper action in this regard," he asserted.