Mangaluru, Mar 1: Shree Gurudevananda of Odiyoor Shree Gurudevadatta Samsthanam is well known for his gesture of treating everyone equally in the society irrespective of their religion, caste, community through his social service programmes. He has won the hearts of people, by striving to reach people through his famous programmes like 'Gram Vikas' and various other religious activities.

Three decades ago, Odiyoor was merely a waste land. But Shree Gurudevadatta Samsthanam has transformed the land into a multifaceted center in a short period of time. Being called as the ‘Ganagapura’ of south, it has become an abode of communal harmony. The divine power, success, achievements, sacrifice, courage, spirituality, social thinking and humble service of Shree Gurudevananda Swamiji have contributed a lot to the success of the Shree Gurudevadatta Samsthanam. 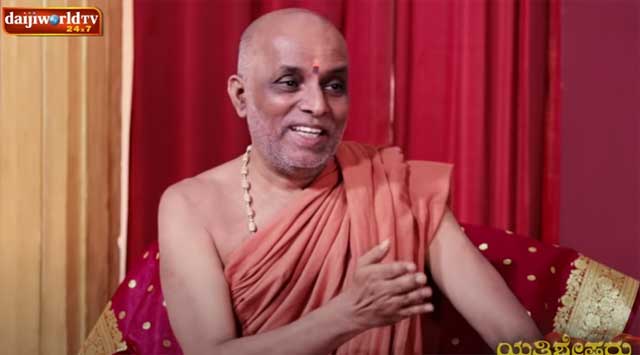 Shree Gurudevananda Swamiji, in an in-depth interview with Daijiworld editor-in-chief, Walter Nandalike on Daijiworld 24x7 channel's 'Yatishreshtaru' programme, speaks about life before he became a sage and 'Gram Vikas'.

DW: Swamiji, our viewers are enthusiastic to know about 'Purvashrama' of Gurudevananda Swamiji?

Swamiji: Since my childhood, I had a fascination for spirituality. In everyone's life, there will be a turning point. Seeing my sister suffering in illness, brought a transformation in me. Later, I seriously started to think about life. Our life should not become like stagnant water. It will not be wrong to say that life of a few saints inspired me in the initial stage. Life of Bhagawan Nithyananda of Ganeshpuri inspired me. When a person grows spiritually, hatred in him gradually reduces.

DW: Did your family members support you in the decision of taking up ‘Sanyasa’?

Swamiji: We can grow only if everyone supports us. Initially, they were never ready to accept. I was born in the same place. I have an elder brother and a sister. 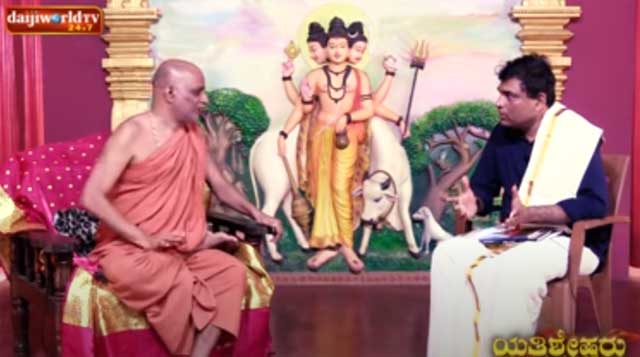 DW: Are you from an agricultural family?

Swamiji: Yes, I was from an agricultural family. My father is no more, but my mother resides in my native. It is more than 40 years now after entering into spiritual life.

DW: Where did you do your education?

Swamiji: I completed my primary education in Karopad and high school education in Kanyana. Later, I could not complete my education. Hence, in the latter part of my life, I started a school in this village. There are 300 to 400 students in the school.

DW: What did you do after your high school?

Swamiji: I did not get the opportunity to study after my high school education. I was away from my native at the age of 14. In search of a job, I came to Mangaluru. I worked as a clerk for an advocate for three years and later in the cashew industry as a supervisor.

DW: When did you obtain the 'Deekshe' and from whom?

Swamiji: I obtained 'Deekshe' from Muni Vivekananda 40 years ago who had built an Ashram in Pune. It is called the Datta Yoga Ashrama.

DW: What is your name in 'Purvashrama'?

Swamiji: My name in 'Purvashrama' was Narayana. Later, I was named Gurudevananda.

DW: We have heard about your pro-social activities including the formation of self-help groups, and providing shelter to the needy by constructing houses. Can you brief our viewers about this?

Swamiji: Kabir Das says that the life of a saint is not for the saint, but for the society. I have contacted each house and people in my village and took them into confidence. Later, the service was expanded to 10 other villages. After developing these villages, I concentrated on the entire taluks. To reach people, I executed a programme called 'Sanathana Samskara Sankalpa Abhiyana'. I have tried to implement the same in the entire district after travelling 5 to 6 taluks. With the objective of Samskara, Sangatane and Samrudhi, we have started the concept of ‘Gram Vikas’ programme and this programme have been extended to three districts.

DW: We came to know that you give priority to all the religions and through the 'Gram Vikas' programme, the first house was built for a Muslim family and second one for Christian.

Swamiji: Anyone can seek help. The first application had been filed by them. So priority was given to them. In another village, a Christian family sought help for help. Service should be a sacrifice. Service should not be done for name and fame or personal gain.

DW: What is your message to the society?

Swamiji: You will learn when you face problems. If possible, let us live for others by helping the needy.