Exclusive: 'Life is like bubble in water, we should do good for society' - Bayaru Swamiji

Mangaluru, Mar 28: Sri Sri Sri Umamaheshwaratirtha Swamiji of Chitramula Math, Bayaru is well-known for his social work in rural areas. Swamiji is also a good singer and has lent voices for Bhajans and devotional songs.

In an in-depth interview with Daijiworld editor-in-chief, Walter Nandalike on Daijiworld 247 channel's 'Yatishreshtaru' programme, Swamiji spoke recalled his spiritual journey and his works for the welfare of people.

Q: Swamiji, can you briefly tell us about Chitramula Math?

A: Chitramula Math was established in the year 1983 by my father. I never dreamt that I would be a Sanyasi. At the age of 17, I left home.

Q: Where are your parents from?

A: My parents are from Puttur and I obtained my primary education in Sampya in Puttur. There is a temple here that was built by my father. 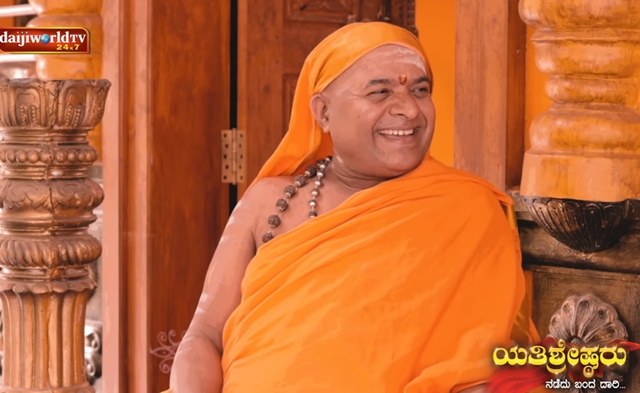 Q: What was your name in 'Purvashrama'?

A: My name in 'Purvashram' was Umesh. While taking the 'Deekshe', I requested my guru to name me as Umamaheshwara. I was so fond of music. But in those days I was not allowed to play the harmonium. Later, I went to Bengaluru.

Q: When were you born?

Q: When you say you went to Bengaluru, did you go alone?

A: Yes, I had a dream to achieve something in life. After selling my harmonium and without letting anyone know, I went to Bengaluru. From there I travelled to Mumbai. I worked very hard and was keen to receive an education. I used to read at night and work at a private company to sustain myself. When I was in Mumbai, I used to practice meditation. I frequently visited temples, churches, and mosques. I never discriminated. Later, I started my factory on Martin Road, in New Mumbai. The factory ran for one year and I faced several problems. After my father fell ill, I came back to Puttur. 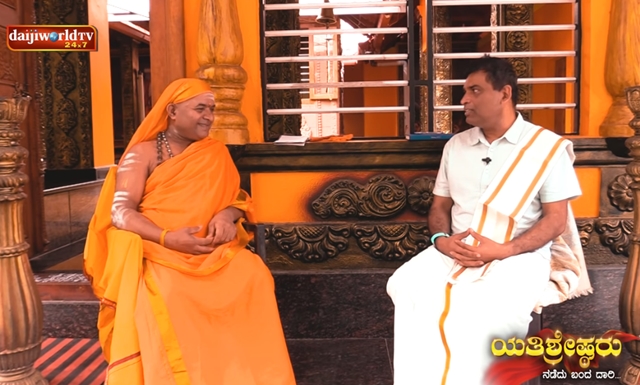 Q: How many siblings do you have?

A: Seven. Five brothers and two sisters and all of them are married.

Q: From whom did you take 'Deekshe'?

A: After the demise of my father, I had to look after this place. Later, I moved to Kukkaje. My guru Chaniyappa Swamiji taught me mantras for five years. I would meditate even there. Later, I took 'Deekshe' from Veera Brahmendra Swami Pita in Bengaluru. In 2013, I went to Ayodhya, where I took part in various programs along with Pejawar Swamiji. When I was out of this place, my brother looked after this Math. I was at Vishwa Kundali Yogashrama in Raja Ghatta in Doddaballapur and I looked after ashram for four years. I used to visit various rural areas there. There I was actively involved in Shri Kshetra Dharamsthala Rural Development Project programmes.

Q: You were actively involved in developmental works in rural areas in Bengaluru. What brought you back to this place?

A: There is a Math under construction there. Mostly, it will be completed in the coming days. One month before coronavirus lockdown I came here for Brahmakalashotsava at this Math. Later, as the impact of corona became severe, I had to remain here. I have a plan to start an orphanage and goshala and there are some donors who have come forward to donate land.

Q: Can you tell us about your contribution to the field of music?

A: After my friends found me singing in my room in Mumbai, they asked me to audition for a singing competition. I did not even know to speak Hindi properly. My friends paid entrance fee and gave me attire to wear for the competition. At the audition, I sang a line of classic Hindi song. The judges loved my singing and selected me. They also told me to participate in stage programs. Initially, I refused, and but then I have agreed. At programmes after I sing, the audience demands that I sing the song once more. The organiser had also said that my voice is good. In that competition, I bagged the first prize. I have sung a song for a Hindi movie after a director provided me with a chance.

Q: What is your message to the present generation?

A: Our life is like a bubble in the water. We should be determined. We came to this world with nothing and will go back with nothing. But, one day we will leave this world, so we should do something good for society.

Title: Exclusive: 'Life is like bubble in water, we should do good for society' - Bayaru Swamiji