Bengaluru. Jul 21: Two software engineers who were selling drugs in the city were arrested by Suddugune Palya police personnel. When the arrested engineers, Muhammed Irfan, and Tariq Hassan, were questioned, the police were shocked. Both Irfan and Hassan had gone to Dubai from Kerala a few years back and were working as software engineers. Because of coronavirus, they left their jobs and returned to their home towns.

The youngsters who were drawing handsome salaries, found it difficult to carry on with life. They got introduced to a man from Hyderabad through a common friend. The man from Hyderabad turned them into drug peddlers in a few days. The man, who had many foreign customers in Bengaluru, used to supply drugs through these two men. 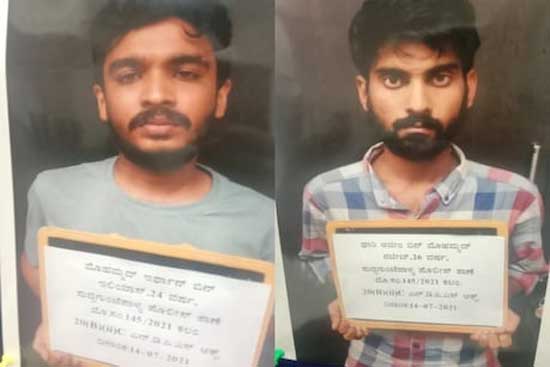 The man used to bring Hashish from Hyderabad and sell the same to foreigners. The youngsters used to supply drugs two to three times a month and earned up to five lac rupees per month, the police found.

The police have taken both of them into custody. However, in spite of detailed questioning, the accused did not reveal anything about their Hyderabad-based boss. They are just saying that the boss paid them several lacs per month and helped them to find a way of life when they were devastated. The police have taken into custody drugs worth two crore rupees from their possession. Both the mobile phones have been taken into custody. If the police are able to find out about the identity of the Hyderabad drug supplier, they will be able to crack more drug cartels.