According to the US National Weather Service (NWS), at least 12 inches (30.48 cm) of snow are expected to fall in the region this weekend and Monday amid wind gusts of 100 miles per hour (160.9 km per hour).

Warning people not to travel to the mountain area, the NWS said, "blowing snow will significantly reduce visibility at times, with periods of zero visibility." 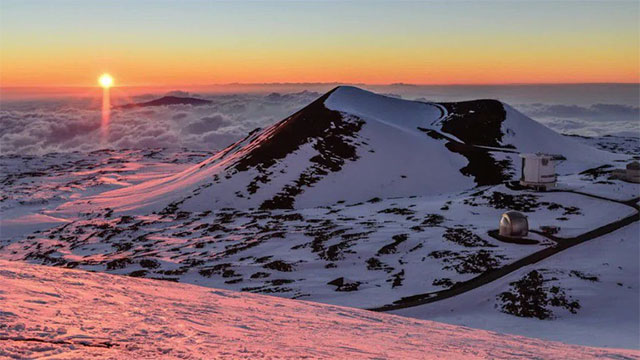 The National Weather Service's prediction centre said it's common to see snow above 11,000 feet (3,352.8 meters) in Hawaii. The state's third-tallest peak, Haleakala, which stands at just over 10,000 feet, only records snow every two to three years, Xinhua news agency reported.

The NPR reported that across the US the weather is simply weird this weekend. As of Saturday, the only other places to see blizzard warnings so far this year are Alaska and the high plains of Wyoming, Nebraska and South Dakota, along with a small sliver of western Minnesota.

"The highest peaks of Hawaii spent the weekend under a blizzard warning, while record rainfall drenched the Pacific Northwest, unseasonably warm temperatures stretched across the Midwest and South, and a major snow drought in the Rockies means Denver has still not seen its first snowfall of the season," the report said.

Last week Denver smashed the record for the latest first measurable snow this winter season. The previous record was set on November 21, 1934.