Mangaluru, Dec 18: The 18 mgd and 81.7 MLD purification plants of the Thumbe vented dam which provided drinking water to the city, are being upgraded along with the jackwell. Seventy percent of work has been finished, and a deadline of December 24 has been set to complete the task. The work is expected to be completed before the deadline.

The project has been undertaken under the smart city project. Out of the tender amount of nine crore rupees, Rs 1.5 crore is being used to upgrade the purification plant. The remaining amount will be used to reconstruct the protective wall of the dam. The protective wall on one portion had collapsed due to heavy rain and flood two years back. 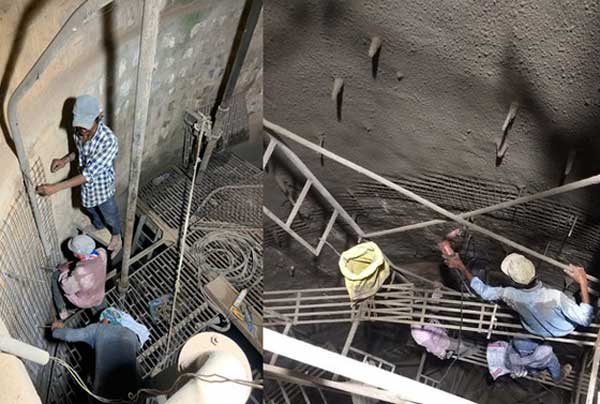 The jackwell that is being upgraded now was built in 1971. It had become very old and because it was built of rocks, it had developed cracks. As water supply was being restricted because of this problem, it was decided to repair and upgrade it. In the first phase, grouting was resorted to stop water from leaking into the well. Now, iron mesh is being fitted, and sand and concrete mix is being pasted. Thereafter, shot crating will be done to strengthen the wall. The RCC slab will be built thereafter. The contractor has promised to finish the work within the deadline, the officials said.

In the past, an additional pump was made available for use in case the other one develops problems. Now, all the pumps are being run to maintain water supply and they are interlinked. The jackwell now being upgraded is used to supply water to Panambur and Bendore purification plants. It is possible that the water being pumped may be a little less than the normal.