Mumbai, May 19 (IANS): Ringing in a new social era, Maharashtra's Maha Vikas Aghadi (MVA) government has banned all ancient 'widow-hood' rituals on grounds that they violate human rights, dignity of women and such practices have no place in the era of modern science. 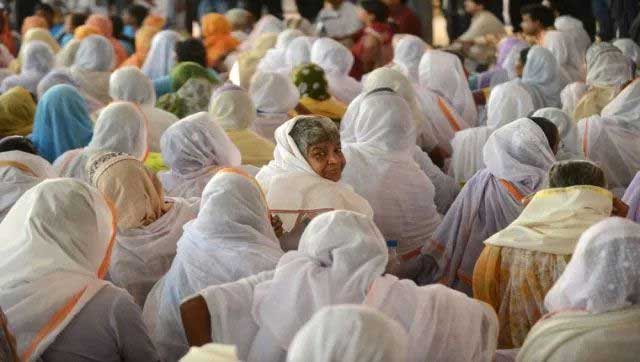 The first sparks were ignited by the Gram Panchayats of two small villages Mangaon and Herwad, Kolhapur district - last fortnight when they resolved to outlaw all such nightmarish practices women who lose their husbands are made to undergo.

The state government said: "The Herwad Gram Panchayat (Kolhapur) has banned rituals of widow-hood by passing a resolution in that regarda Now other gram panchayats should be encouraged."

Mushrif made it clear that such old practices should have no place in a science-oriented era and urged all other gram panchayats to undertake mass awareness campaigns and pass resolutions akin to Herwad Gram Panchayat, a village of around 7,250 souls in Kolhapur.

Signifying a silent social change, on May 1 and May 5, Mangaon Gram Panchayat and Herwad Gram Panchayat, respectively, passed resolutions frowning at the age-old customs imposed on widows - young or old - upon losing their husbands.

These practices include: erasing the sindoor/kumkum (vermilion), removing 'mangalsutra', toe ring and other jewellery, smashing her (green) glass bangles, barring her from wearing coloured clothes and condemning her to whites for the rest of her life.

The widows are further ostracised and stigmatised by preventing them from attending any family, social, religious functions, celebrating festivals openly, interacting with other males, and in some cases, chopping off their tresses, as per traditions handed down since centuries.

Taking a cue from Herwad and Mangaon's initiatives, the MVA government order said that these practices violate human rights, hurt the dignity of women as enshrined in the Constitution and said it's the need of the hour to abolish such customs.

Shiv Sena Spokesperson Dr Manisha Kayande saluted the decision terming it 'landmark' and as important as the social reforms initiated by the legends like Raja Rammohan Roy, Mahatma Jyotirao Phule, Savitribai Phule and others.

"This move will ensure that widows are now set free from the inhuman tortures and stigmas they suffer upon losing their husbands and now they can expect a life of respect and dignity," Dr Kayande said.

Nationalist Congress Party MP Supriya Sule lauded Mushrif's decision as a 'progressive' one and said: "Big Thank You, Hon. Hasan Mushrif Sahab. Government of Maharashtra for taking such a progressive decision for widowed women on the grounds of the resolution passed by Herwad Gram Panchayat."

"We have to forgo all these centuries-old anti-women customs and practices.... I have personally undergone such situations. I am happy to note that people are accepting such positive changes," said Thakur.

Women activist and Bhumata Ranragini Brigade President Trupti Desai said she has been working in this field for several years and met with immense resistance from conservatives, but now it is showing positive results and people are voluntarily coming out to dump these degrading customs.

"When my brother-in-law Satish Desai died in March 2021, we counseled his wife Sangeeta not to follow any of these customs and she concurreda I urge Chief Minister Uddhav Thackeray to now enact a suitable law or modify existing laws to give this government circular legal teeth for the benefit of women," Desai said.