The recent sighting of a long-billed vulture chick at the Ramadevarabetta sanctuary has come as a shot in the arm for the wildlife lovers and the Karnataka forest department. The last time this happened was nearly seven years ago, forest department officials said.

It's been a sad story for vultures in India. The nine species of vultures that thrived in the country are on the verge of extinction. Of these, the long-billed vulture is practically on its last legs in the wild in Karnataka. 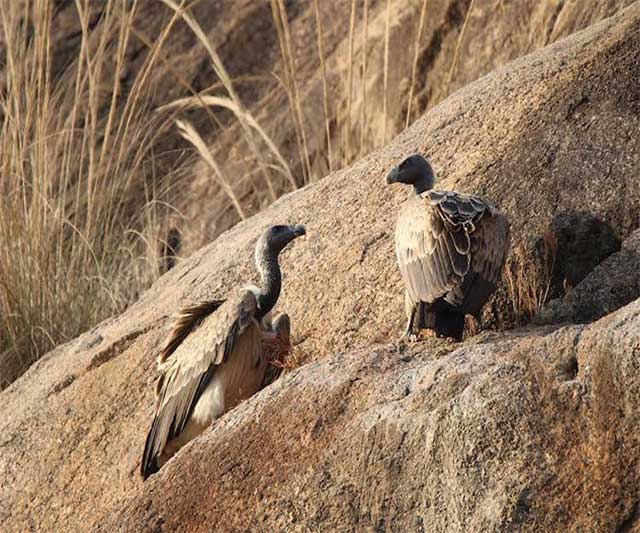 Spread over 800-acre expanse in the hilly, wooded areas of Ramanagara district, the vulture sanctuary is the last hope for these winged scavengers. After it was accorded sanctuary status in 2012, the authorities have clamped down on film shooting activities in the area and streamlined the tourist activity also.

"We have bifurcated the tourism activities into temple and wildlife groups. So people going to the temple will not cause unnecessary disturbance to the vultures. Only people specifically interested in nature and wildlife venture into the sanctuary," said V. Devaraj, Deputy Conservator of Forests, Ramanagara district.

Ramadevarabetta is also the only area in south India to be earmarked as a protected habitat for this vulture species which have dropped to dangerously low levels over the past decade.

Reduced habitat and pollution apart, vultures have largely fallen prey to man-made factors. Earlier, vultures would descend upon carcasses of livestock left in the open on village outskirts. That practice is no longer in vogue as the villagers bury the dead animals for claiming insurance money after selling the skin to leather merchants. And then, for long, the vultures used to feed on the carcasses of livestock administered with diclofenac-based anti-inflammatory drugs. This also led to a drastic fall in vulture numbers.

With the latest sighting of the vulture chick at Ramadevarabetta, the number of long-billed vultures at the sanctuary now has officially risen to five. Although it is a good sign, it is clearly not enough to keep the rare vulture species from dying out. Actually, nobody is really sure of the real numbers.

"We have one photograph of two pairs of vultures in the frame. So it means there are four vultures. Now recently, with the sighting of the chick, we know there are at least five vultures in the sanctuary," said Devaraj.

One of the reasons for the uncertainty over vulture numbers is the difficulty in tracking these giant birds. Visual identification is the only way that the bird watchers and forest authorities can keep track of the vultures. Admittedly it is a very unreliable approach. Added to this, vultures are sexually dimorphic which makes it impossible to differentiate between the male and female species by sight.

To overcome these hurdles, the forest authorities are exploring genetic profiling of the birds, and have tied up with Mysore University.

"By observing the DNA samples collected from feathers or fecal matter, we can find out how many male and female vultures are present. This information can be used for maintaining gender ratios during the breeding programs," explained Prof Malini Suttur, Chairperson, Department of Genetics and Genomics, University of Mysore.

With a pair of vultures hatching one egg in a season, growing the numbers is certainly a long-drawn process. To boost the vulture population, is a vulture breeding centre being set up at the Bannerghatta National Park on the outskirts of Bengaluru. The centre is expected to be functional in a year's time.

"We are expecting that in the next five years, we will be able to breed quite a few vultures at the breeding centre in Bannerghatta, and release them into the sanctuary at Ramadevarabetta," said Devaraj.

Title: Karnataka up against odds as it tries to revive dwindling vulture population