Udupi, May 27: "Chief Minister Basavaraj Bommai has no hold over administration and his ministry. A department is functioning as a broker," said K Mathai, Coastal district in-charge of Aam Admi Party.

Taking a dig at the so called double engine government at the state and the centre and especially in Karnataka, he alleged that commission bucks now hover at 50% at the BBMP from what was earlier 20%, 30% and 40%. 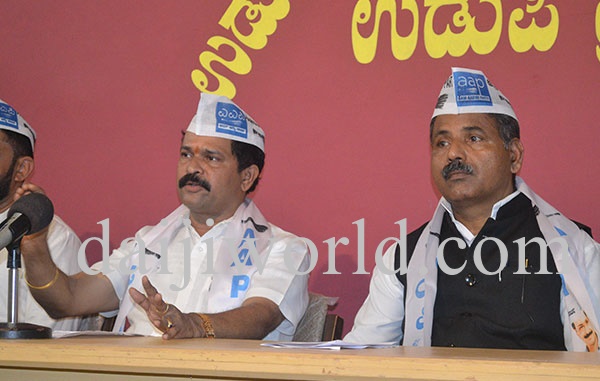 Speaking at a press conference at the Udupi Press Club on Friday, May 27, Mathai said the state government had failed to deliver a corruption-free government after Prime Minister Narendra Modi had made such a promise while referring to the double engine government.

He said a number of leaders are joining the AAP and added that the party intends to deliver a corrupt-free government while responding to the people's needs.

The newly appointed Udupi district president of the AAP Sunil Diwakar said Udupi is in a state of limbo when it came to development. The Varahi drinking water project was progressing at a snail's pace, he said.

He said farmers of Udupi had a lot of expectations adding that the town is facing problems such as disposal of wastes and the purification of Indrani waters.

Sunil Diwakar said AAP is not a political party as it is giving me an opportunity to work for the people.