Personally monitoring the situation, Chief Minister Eknath Shinde has put all districts on high alert, visited the Disaster Management Centre and directed officials to make all arrangements including shifting of people living in vulnerable areas as the incessant rains continued. 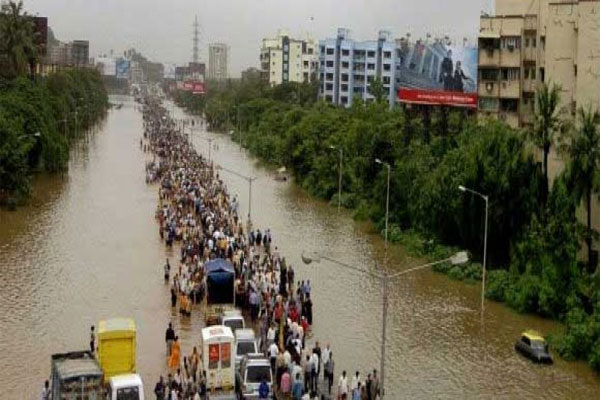 There have been no reports of any rain-related casualties so far from the state.

The IMD has issued a Red Alert for Raigad, Ratnagiri, Sindhudurg, Kolhapur, and Satara and Orange Alert for Mumbai, Thane, Palghar, Pune till Friday.

The Central Railway and Western Railway suburban trains as well as Mumbai Metro services were operating normally after overnight downpour, barring some delays.

The BrihanMumbai Municipal Corporation (BMC) has deployed extra pumps to eject the flood waters in several areas and closely monitors the rising water levels in the vulnerable areas in the city and suburbs.

Other coastal districts of Palghar, Thane, Raigad, Ratnagiri, and Sindhudurg were also lashed by heavy rains with big and small local rivers swelling above the danger levels.

Many towns like Chiplun, Vaibhavwadi, Ambet, Khed, Poladpur and others were flooded, hitting road traffic, and minor hill-slides reported in a couple of areas in the Western Ghats in Raigad and Ratnagiri districts.

Shinde said that around 3,500 people have been evacuated in low-lying areas of the state as a precautionary measure in view of the continuing heavy rains.

Villagers living in the vicinity of landslide and hill-slide prone areas or on the banks of rivers and the Arabian Sea were on high alert with the major Vashishth and Jagbudi rivers flooded and flowing above the danger marks in some areas.

Several rivers in the Konkan belt like the Kundalika, Ulhas, Amba, Savitri, Patalganga, Shastri, Kajli, Kodavali and Gadi rivers were flowing above the danger levels by this evening.

The IMD's Regional Meteorological Centre has forecast heavy rains in several districts in the coastal and western Maharashtra for the next four days, with alerts and officials ordered to prepare for any eventuality.

The entire west coast from Gujarat, Maharashtra, Goa, Karnataka and Kerala is covered with dense clouds with the possibility of very heavy to heavy rains, and isolated extremely heavy rains for the coastal regions plus central and western Maharashtra, said IMD-Pune head K. S. Hosalikar.

Taking full preventive steps, two teams each of NDRF have been deployed in Mumbai, Thane and Kolhapur and one each in Palghar, Raigad and Ratnagiri.

One team each of SDRF are already in the field in Nanded and Gadchiroli where heavy rains continue since past evening.

Shinde has asked for specific monitoring in Palghar, Thane, Raigad, Ratnagiri, Sindhudurg and Kolhapur districts to keep all agencies in top preparedness for any eventuality.

Deputy Chief Minister Devendra Fadnavis said the government has reviewed the rainfall situation in the state and the administration has been put on a high alert.

Most areas of the coastal regions have been clobbered by 65 mm to 200 mm rain in the past 24 hours alone - virtually wiping out the June deficit due to the nearly month-long delay in onset of monsoon.