The NCP supremo also accused the BJP of "finishing off its regional allies" after tying up with them to grab power, referring to the recent developments concerning the Maha Vikas Aghadi in Maharashtra, earlier with the Shiromani Akali Dal in Punjab and now the latest with the Janata Dal (U) in Bihar. 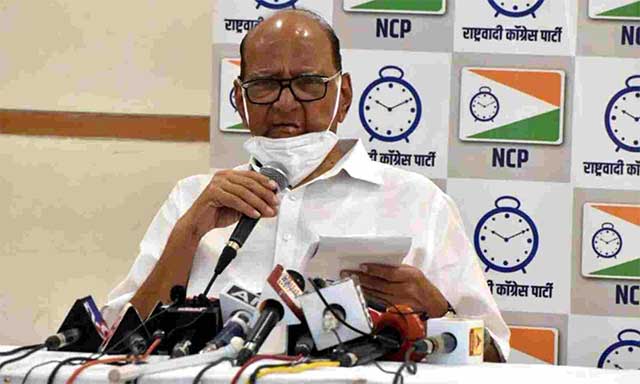 "The BJP's speciality is to join hands with a regional party during elections, but ensure that the local ally wins fewer seats. We have witnessed this with the SAD in Punjab and Shiv Sena in Maharashtra," said Pawar.

He referred to BJP President J. P. Nadda's recent assertion that regional or family-led parties have no future and they would cease to exist, with only the ideology-driven BJP surviving in the country.

"From this (Nadda's statement), it's clear that the BJP eliminates its allies gradually. This was even Nitish Kumar's complaint," pointed out Pawar, adding that SAD leader Prakash Singh Badal had allied with the BJP but today his party (SAD) is almost annihilated in Punjab.

"Now, the BJP is planning how to weaken the Shiv Sena by creating a rift in the party -- Eknath Shinde (who rebelled in June) became the CM, and others (BJP) helped him," Pawar said.

The NCP, Shiv Sena and the Congress were allies in the 31-month old MVA government, which crashed on June 29 after the Shinde-led revolt, which now some BJP leaders are claiming credit for.

In an apparently pre-emptive decision, Nitish Kumar on Tuesday walked out of the JD(U)'s alliance with the BJP in Bihar, resigned and formed a new government with the support of the Opposition Grand Alliance comprising the Rashtriya Janata Dal and the Congress.