Baghdad, Aug 24 (IANS): Supporters of Iraqi Shia cleric Moqtada al-Sadr have ended their day-long protest outside the compound of the Supreme Judicial Council (SJC) in Baghdad demanding the dissolution of Parliament.

A statement by al-Sadr's aide Mohammed Salih al-Iraqi said that Tuesday's sit-in was to "encourage the SJC to hold the corrupt accountable, but to avoid bringing harm to the people, we advise the protesters to withdraw", reports Xinhua news agency. 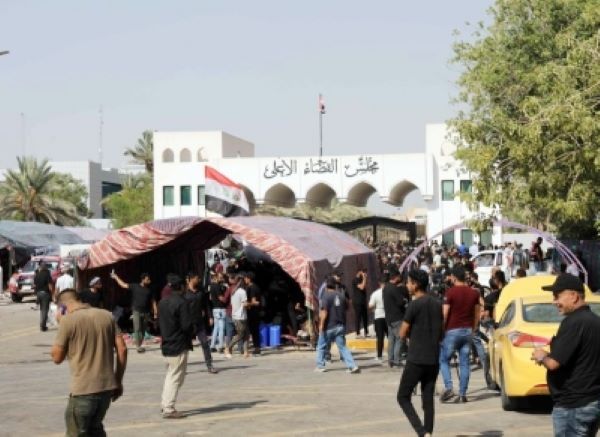 As the protesters withdrew from their sit-in site, the SJC said in a statement that it would resume its activities on Wednesday morning.

Earlier on Tuesday, hundreds of al-Sadr supporters set up dozens of tents to begin a sit-in protest in front of the SJC compound and sent threatening messages to the council in an attempt to pressure the federal court into dissolving Parliament to hold new parliamentary elections.

The suspension of the SJC prompted caretaker Prime Minister Mustafa al-Kadhimi to cut short his trip to Egypt for a five-way Arab summit.

Al-Kadhimi, also commander-in-chief of the Iraqi forces, returned to Baghdad to directly supervise the security forces protecting judicial institutions, according to a statement issued by his media office.

"Disrupting the work of the judicial institution exposes the country to real risks," he warned, calling for an immediate meeting of political leaders to activate a national dialogue to defuse the crisis.

President Barham Salih said in that "the country's developments require everyone to remain calm and give priority to dialogue so that the country does not slip into unknown and dangerous mazes in which everyone loses".

He said that disrupting the work of the judicial institution "is a serious matter that threatens the country."

For his part, Parliament Speaker Mohammed al-Halbousi said that "we must all resort to the constitution and be at the level of responsibility to get the country out of this suffocating crisis that may lead to the illegality of the political process".

The latest sit-in came as the political disputes have escalated in the past weeks between al-Sadr and rival Shia parties in the Coordination Framework (CF), an umbrella group.

On July 30, al-Sadr's followers broke into the heavily fortified Green Zone in central Baghdad and held an open sit-in in and outside Parliament building, demanding the dissolution of the parliament and early elections, all rejected by the CF parties.

The CF became the largest alliance in Parliament after al-Sadr ordered his followers in the Sadrist Movement, the biggest winner of the October 2021 elections with 73 seats, to withdraw.

During the past months, the continued disputes among the Shia parties have hampered the formation of a new government.