Iraqi security forces fired tear gas canisters and bullets in the air to disperse the protesters who stormed the compounds, while sporadic shootouts from unknown gunmen occurred inside the heavily fortified zone, Xinhua news agency reported, citing a source from the Interior Ministry. 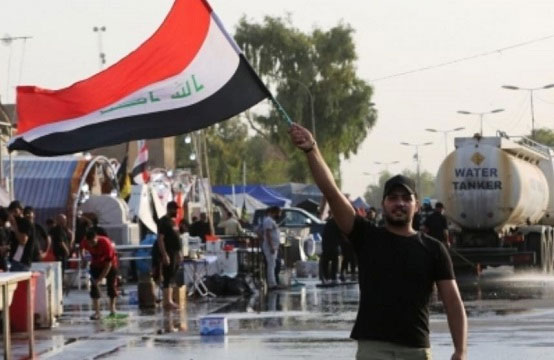 At least 12 protesters and security members were killed and dozens wounded, the source said, adding the security forces managed to push back the protesters from the presidential palace and the prime minister's headquarters before sunset, but their weeks-long sit-in protest was continuing in the parliament building inside the Green Zone.

He has also launched an investigation into the casualties in the clashes, pledging to identify the perpetrators and hold them accountable according to the law, the statement added.

Earlier in the day, shortly after al-Sadr said he would quit politics in protest, his followers threatened to storm Iraq's government buildings in the Green Zone, which houses the main government buildings, residences of Iraqi top officials, and some foreign embassies.

Amid the heightened tension, the UN Assistance Mission for Iraq and the Arab League (AL) called for all Iraqi political actors to work toward de-escalation.

"Today's developments are an extremely dangerous escalation," said the UN mission in a statement, calling on all protesters to immediately leave the Green Zone and vacate all governmental buildings, stressing dialogue as the only means to resolve political differences.

The AL Secretary-General Ahmed Aboul-Gheit warned against the situation in Iraq sliding into more violence, chaos, and bloodshed.

"The Arab League is following all the measures taken by the Iraqi government to maintain civil peace, security, and stability in the country," it said in a statement.

Political disputes have escalated in the past weeks between al-Sadr and his rivals in the Coordination Framework (CF), an umbrella group of Shiite parliamentary parties.

On July 30, al-Sadr's followers broke into the heavily fortified Green Zone in central Baghdad and held a sit-in protest in and outside the parliament building, demanding the dissolution of the parliament and early elections, all rejected by CF parties.

The bloc became the largest alliance in the Iraqi parliament after al-Sadr ordered his followers in the Sadrist Movement, the biggest winner of the Oct. 2021 elections with 73 seats, to withdraw from the parliament.

During the past months, the continued disputes among the Shiite parties have hampered the formation of a new Iraqi government, making it unable to elect a new president by a two-thirds majority of the 329-seat parliament under the constitution.

If elected, the president will appoint the prime minister nominated by the largest alliance in the parliament, now the CF, to form a new government that would rule the country for the next four years.