Panaji, Oct 2 (IANS): While Karnanataka has requested the Goa government to provide land to set up a Kannada Bhavan in the coastal state, the social activists from here have reminded the former about alleged diversion of Mhadei river and have asked to stop it.

Karnataka Chief Minister Basavaraj Bommai had recently requested his Goan counterpart Pramod Sawant for a piece of land to construct Kannada Bhavan in Goa, where thousands of people from Karnataka stay and are into the business of vegetable and fruit vending and now into fish and others. 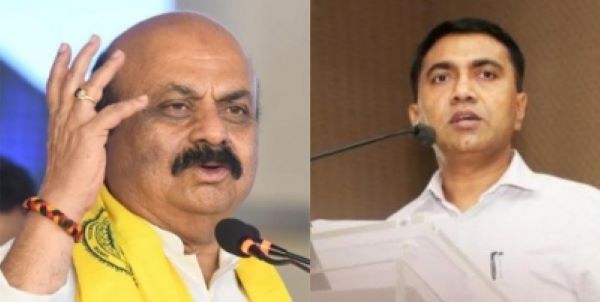 Bommai wrote to Sawant asking for about two acres of land, but those fighting to protect 'Mhadei' and other sections of society have opposed the move of Karnataka government.

However, Bommai has also reminded Pramod Sawant that the Karnataka government had allocated Rs 3 crore for a Konkani Bhavan in Mangaluru. There are many writers in Karnataka who write in Konkani language and promote it.

Bommai had allotted Rs 10 crore to build the structure in Goa in his last budget.

All Goa Kannada Mahasangha President Hanumantha Reddy Shiroor said that Karnataka Chief Minister Bommai has written a letter to Goa Chief Minister Pramod Sawant seeking land for Karnataka Bhavan. "It is a dream of people from Karnataka that this Bhavan should come into reality. Now it seems that it will come true. Many are trying for it," he said.

According to Shiroor, this Bhavan will be like how Goa government has Goa Sadan in Delhi. "Our people will come and stay in Kannad Bhavan. Hence it should come in reality and we request Goa Chief Minister to help," He said.

Responding to this, social activist Shanker Polji said that Karnataka has diverted water from Mhadei and Goa government is mum over it. "Do our ministers dare to ask about Mhadei to Karnataka government. They are not doing it. In Present situation where there is no land left for Goans , the government should say no to the proposal," Polji said.

"We want our land for the next generation and not for anyone. On this issue there is a real need to ask our Mhadei back, they have diverted our Mhadei. Our next generation will not get water in the state," he said.

He questioned whether any land is left in Goa to give for Kannada Bhavan.

Former Chief Minister Digambar Kamat, who recently joined the BJP from the Congress, in the past, supported the construction of a Kannada Bhavan in Goa.

"Karnataka writers have contributed to the Konkani language. Such is the relation... Hence there is a need to strengthen the relation between Karnataka and Goa. Some speak whatever they want, we should not pay heed to them," Kamat had said in July this year.

"We should help them for Kannada Bhavan, in getting land. We have Goa Bhavan in Mumbai, it helps us when we go there," Kamat had said.

Linking the issue to the ongoing dispute between Karnataka and Goa over the waters of the Mhadei river, Progressive Front of Goa (PFG), which agitated in the past for Mhadei water, has opposed having a Kannada Bhavan in the state.

"Before making such a request, Karnataka government should restore Mhadei and stop all diversion. We will strongly oppose the Bhavan until Karnataka withdraws its claim on the waters of the Mhadei river," PFG convenor Hrudaynath Shirodkar said.