Bengaluru, Oct 5 (IANS): Moved by the plight of an injured elephant calf in the Nagarhole Tiger Reserve, Congress leader Rahul Gandhi has reached out to Karnataka Chief Minister Basavaraj Bommai.

Rahul Gandhi, currently on the Karnataka leg of his 'Bharat Jodo Yatra', is spending time with his mother and interim Congress chief Sonia Gandhi over a two-day break amid the long walkathon. 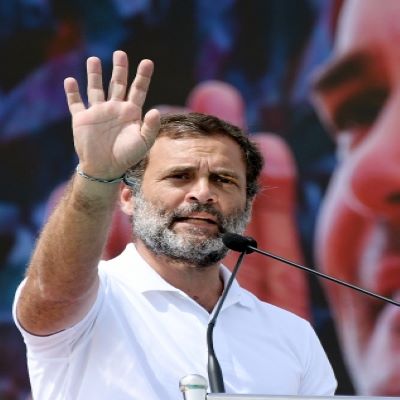 In his letter addressed to Bommai on Wednesday, Rahul Gandhi said, "The Congress President and I briefly visited the Nagarhole Tiger Reserve where we happened to come across the painful sight of an injured baby elephant, with its mother. The little calf has a severely injured tail and trunk, and is fighting for its life."

While acknowledging the viewpoint that nature must be allowed to take its own course, Rahul Gandhi said that exceptions are often made in the case of endangered and iconic animals, in extremely severe cases such as the injured elephant calf.

Throughout his Bharat Jodo Yatra in Karnataka, the Congress leader has been targetting the ruling BJP in the state over 'rising corruption' and 'communalism'.

"I wanted to cross political boundaries and appeal to your sense of compassion to intervene and save the little elephant," Rahul Gandhi said.