Goa govt has failed in all aspects: Vijai Sardesai

Addressing a press conference here, Sardesai alleged that ministers of the state are worse than dacoits of Chambal in Madhya Pradesh, saying that because of this reason Goa is not getting Foreign Direct Investment (FDI) despite having rich diaspora. 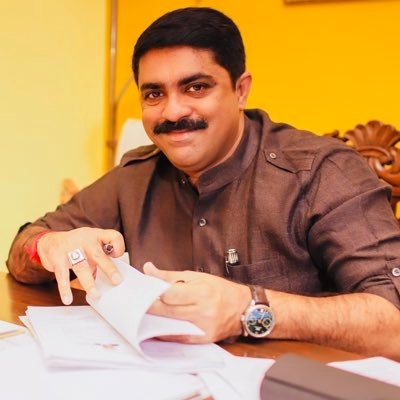 "Despite having rich diaspora, Foreign Direct Investment is not coming to Goa because they have to first 'invest' in Ministers. Dacoits from Chambal in Madhya Pradesh used to loot investors at knife-point. These ministers are worse than them. Government is run by dacoits in Goa," Fatorda MLA, Sardesai said.

Speaking about the figure given by NITI Aayog that more than 1 lakh youths are unemployed in Goa, Sardesai said that Chief Minister Sawant has rejected it stating only 20,000 are unemployed.

"I want to question BJP's Central leadership, when NITI Aayog has certified him (Sawant) as a failure, then why is he kept in that position? He should be made to step down. He should be replaced immediately for failing in all areas, because continuing him (as chief Minister) is a loss to Goa. No improvement will take place," he said.

He said that because of the government's fiscal policy, the people of Goa will be burdened with heavy taxes in order to repay the state's debt while the development of the state will slow down. "Sawant has made a mess in the economic area," Sardesai said.

"Government should issue white paper on the state of finance. Sawant has failed in ease of doing business, fiscal deficit, unemployment, traditional occupation, health of children and women and also FDI," he said.

"He is good at engineering defection and keeping his chair safe. Now he feels that his position is not safe after Niti Aayog's report, hence he has gone to Nagpur. If he gets blessings from Nagpur, then he can loot more. Nothing good in Goa will happen," Sardesai said.

He said that NITI Ayog has recommended asset monetisation. "Means selling of properties of state government and run government, which is run by dacoits. It is recommending to sell the 'family silver'. Hence, CM should be changed. He doesn't know what the economy is. He has an allergy to talent. There are no good officials in the finance department," he said.

He said that a new Chief Minister should be chosen considering his knowledge and one who can speak well to financial advisors, and one who knows subjects.

Title: Goa govt has failed in all aspects: Vijai Sardesai