United Nations, Nov 15 (IANS): Questioning its legality, India has abstained on a UN General Assembly resolution setting up a mechanism for Russian reparations to Ukraine for war damages.

"The legal validity of such a process by a General Assembly Resolution remains unclear," India's Permanent Representative Ruchira Kamboj said on Monday after abstaining on the vote.

"We must, therefore, not create mechanisms or set precedents without adequate international legal vetting that have implications for the future functioning of the United Nations and the international economic system," she said. 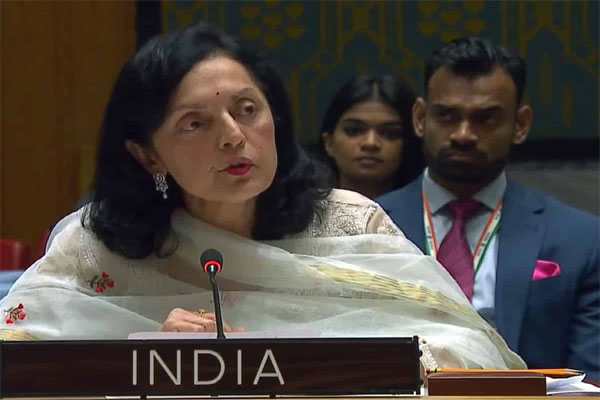 Kamboj's speech also included a criticism of Russia, but without naming it: "The global order that we all subscribe to, is based on international law, the UN Charter and respect for the territorial integrity and sovereignty of all States. These principles must be upheld, without exception."

The resolution passed with 94 votes, with 14 votes against and 73 abstentions.

It said that Russia "must bear the legal consequences" of its invasion and called for setting up an international registry on the damages caused by Russia's invasion of Ukraine and for creating a mechanism for reparation.

The support for the resolution was significantly lower than the 143 votes an Assembly resolution received in October condemning Russia's annexation of Ukrainian territories.

This was because several countries expressed reservations similar to India's on legal grounds.

The Caricom group of 15 Caribbean countries, for example abstained on this resolution but had voted for the last one in the Assembly, as had others like Saudi Arabia.

The voting also reflected a deepening polarisation in the 193-member UN on Ukraine once the topic of reparations was introduced.

Bahamas Permanent Representative Stan Smith, who spoke on behalf of the Caricom, said that colonisers and exploiters also have "moral and legal responsibility for past actions" like colonialism and slavery.

Some nations like Sierra Leone said that the resolution reeked of double standards because countries proposing reparations for Ukraine had opposed reparations for colonialism and slavery.

Kamboj said that it was "unfortunate that as the trajectory of the Ukrainian conflict unfolds, the entire global South has suffered a substantial collateral damage".

The zooming prices of petroleum and fertilisers and the shortage of food grains have hit developing countries the hardest.

"It is thus critical that the voice of the global south be heard, and their legitimate concerns be duly addressed," she said.

Kamboj said that with a "people-centric" outlook, India was providing humanitarian assistance to Ukraine and economic assistance to neighbours reeling from the escalating costs of food and fertilisers.

Any steps that would hinder dialogue to end the war should be avoided, she said.

"We need to objectively consider whether a reparation process through a vote in the General Assembly would contribute to efforts at a resolution of the conflict," she added.

The UN Security Council, which under the UN Charter has the teeth to act, has been crippled by permanent member Russia's veto, propelling the Western countries to take up Ukrainian matters in the Assembly, which does not have enforcement powers but can make a moral point.

"It highlights the importance of gathering evidence to support eventual claims for compensation from Russia on a non-criminal track for the injuries, the deaths, and the extensive damage to public and private property caused by Russia's internationally wrongful acts in Ukraine," he said.

Russia's Permanent Vasily Nebenzia accused the western countries of wanting to use the resolution as a pretext to seize Moscow's frozen assets.