Everyone living in India is Hindu, says Mohan Bhagwat

Bhopal, Nov 16 (IANS): Rashtriya Swayamsevak Sangh (RSS) chief Mohan Bhagwat on Tuesday said that "every person living in India is a Hindu", adding the DNA of Indians is same.

He also asserted there was no need for anyone to change his way of offering rituals.

Addressing the gathering of large participants of Swayamsevaks (Sangh volunteers) in Ambikapur on the occasion of "Janjatiya Gaurav Diwas" in Chhattisgarh's Surguja district, he reiterated that unity in diversity is India's age-old feature. 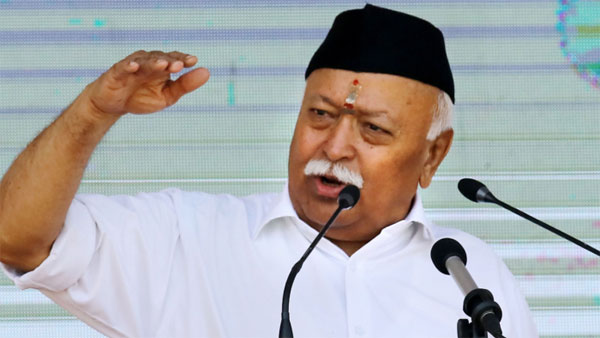 "Hindutva is the only idea in the world that believes in taking everyone along," Bhagwat said.

"We have been telling since 1925 that everyone living in India is a Hindu. Those who consider India as their motherland and want to live with a culture of unity in diversity and make efforts in this direction, irrespective of whatever religion, culture, language and food habits and ideology they follow, are Hindus," he added.

He said the ideology of Hindutva recognises diversity and believes in unity among people.

"The Sangh's work is to build individual and national character and bring unity among people," the RSS chief said.

Meanwhile, he also emphasised on respecting everyone's faith and asserted the DNA of all Indians is the same and they had common ancestors.

"Despite having diversities we all are like... we had common ancestors. Every Indian who is part of the 40,000-year old 'Akhand Bharat' has common DNA. Our ancestors had taught that everyone should stick to their faith and rituals and not try to convert others' faith. Every path leads to a common place," Bhagwat said.

Appealing to people to visit Sangh's 'sakhas' (congregation of RSS workers), he said the 97-year-old organisation's aim is to unite people and make societies influential while walking on the path of truth.

He also appealed to the people to not look at the Sangh from a distance as a spectator.

The RSS chief, who was on his second visit to Chhattisgarh ahead of the 2023 assembly elections, also unveiled the statue of late former Union Minister Dilip Singh Judeo.

Title: Everyone living in India is Hindu, says Mohan Bhagwat