Bengaluru, Jan 21 (IANS): The Congress' Karnataka unit is upbeat about achieving the victory in upcoming assembly elections riding high on the anti-incumbency factor against the ruling Bharatiya Janata Party (BJP) government in the state.

The party has organised massive padayatra programmes across the state. Karnataka unit Congress president D.K. Shivakumar and Opposition leader Siddaramaiah are leading the party with poignant attacks on ruling BJP on one hand, while pitching in at the ground level to boost morale of Congress workers and strategise for elections, on the other hand. 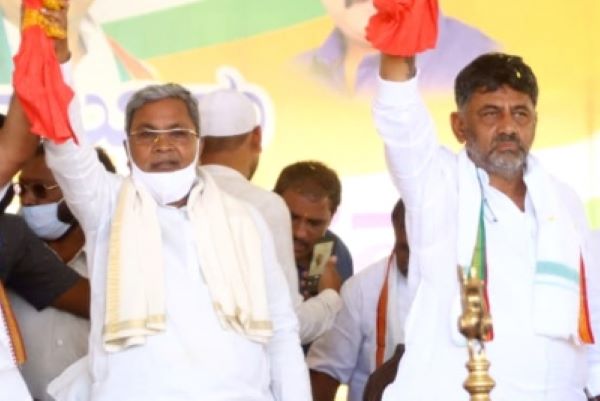 The Congress has carried out 'Mekedatu Padayatra' demanding speedy implementation of the Mekedatu project to ensure drinking water for Bengaluru. 'Bharat Jodo Yatra' led by Rahul Gandhi has also evoked good response in the state.

Former Congress president Sonia Gandhi and party's other top national leaders took part in the rally. Sonia Gandhi walked alongside her son Rahul Gandhi in Mandya, considered as a bastion of the JD-S.

Priyanka Gandhi Vadra had participated in 'Na Nayaki' women's convention in Bengaluru recently and slammed the ruling BJP, saying "the situation in Karnataka is shameful".

She referred to the PSI recruitment scandal and the attempt to change the school syllabus.

Congress has also anointed Mallikarjun Kharge to the position of the party's national president. Kharge who hails from Kalaburagi in Karnataka has a special place in the hearts of Dalits and oppressed classes.

The party is hoping that it would benefit them in the assembly elections. The Congress leaders are currently busy with "Prajadhvani Yatra" in the state.

Shivakumar, who is at the forefront of preparations of elections, stated that earlier, BJP leaders claimed that the elections will be fought under the leadership of Chief Minister Basavaraj Bommai.

"Now, they are claiming that the elections would be held under the leadership of Prime Minister Narendra Modi.

"The BJP government has failed completely in the state. BJP leaders are demanding to join the Congress party and we are being choosy," Shivakumar stated.

"The change is setting in the state," he added.

Siddaramaiah, the Opposition leader stated that if the Congress returns to power, it would increase the quota of reservation for women.

He had charged the debt when his tenure ended was Rs 2.42 thousand crore.

"After the BJP government came to power, the debt has doubled and every citizen has Rs 86,000 debt on his head. The Congress will achieve power in the state and there shall be no doubt about it," the senior Congress leader said.

As part of the "Freedom March" in August last year, pada yatra was taken up in every constituency.

"Membership drive and digital membership drive have been taken up. The war room has been created and heads of various departments are involved in making strategies.

"The Congress has taken up 'Pay CM' poster campaign successfully. Besides, PSI scam, teachers' recruitment scandal, links of BJP leaders with criminal Santro Ravi, 40 per cent commission charges against BJP, the cheap statements by BJP MLA Basanagouda Patil Yatnal calling BJP minister as a pimp, all these developments are going to help the party," he said.

"The people of Karnataka after supporting JD-S and helping H.D. Kumaraswamy becoming CM twice are all set to support D.K. Shivakumar, who has a good chance of making it to the post of Chief Minister," he further said, adding: "Siddaramaiah can also influence the results in 40-50 seats and with the efforts of both the leaders, Congress will make it to power."

Talking about infighting, Mukundaraj said that both the leaders are persevering for the party's victory.