New Delhi, Jan 25 (IANS): Prime Minister Narendra Modi on Friday presented a 'chadar' for offering at the Ajmer Sharif Dargah on the occasion of 811th Urs of Khwaja Moinuddin Chisti.

"Presented the Chadar which shall be offered at the Ajmer Sharif Dargah on the Urs of Khwaja Moinuddin Chishti," the Prime Minister tweeted.

Minority Affairs Minister Smriti Irani along with the President of BJP's Minority Morcha, Jamal Siddiqui, met Modi at his residence to receive the 'chadar'. 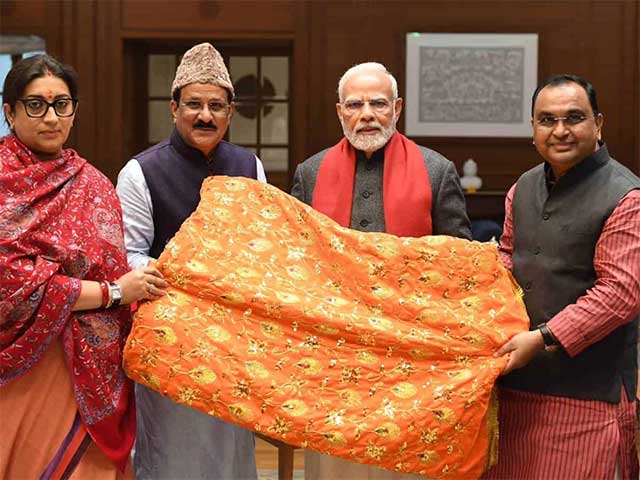 A delegation under the leadership of Irani will offer the chadar at the Ajmer Sharif Dargha.

Speaking to IANS, Siddiqui said, "We are on our way to Ajmer Sharif taking the 'chadar' presented by the Prime Minister with the prayer for peace and prosperity in the country. He wishes India to become a global leader. His message is all about peace and botherhood."

Khwaja Moinuddin Chisti, also known as Khwaja Gareeb Nawaz, was a Sufi saint of the Chisti order. He is known to be the direct descendant of Prophet Muhammad.

Born in Sistan (present-day Eastern Iran and Southern Afghanistan), he travelled all the way from Lahore to Delhi, and finally settled in Ajmer. His tomb in Ajmer, the Ajmer Sharif Dargah, is one of the holiest Islamic shrines in the world.

Muslims from across the world visit the Dargah every year to offer their prayers. Not only Muslims, people belonging to different religions also visit the shrine throughout the year.

To commemorate the death anniversary of the beloved Sufi saint, the Urs festival is celebrated each year in Ajmer during the first six days of 'Rajab', the seventh month of the Islamic calendar.

Khwaja Moinuddin Chisti is also known for establishing the Chisti order of Sufi mysticism in India in the early 13th century. He was the first saint to incorporate the use of music and hymns into prayers. It is believed that Prophet Muhammad once appeared in Khwaja Moinuddin Chisti's dream and asked the saint to become his representative in India.