Udupi, Jun 9: Geeve George and Chaitanya of Little Rock Indian School, Brahmavar represented India at the International Science and Engineering Fair (ISEF), the world's largest pre-collegiate fair with over 1700 participants from 78 countries, held at Los Angeles, USA from May 14 to 19.

India was represented by 20 teams in various categories ranging from plant sciences to math to system software.

“Our project was SAMIS, which is an android app that enables image processing algorithms on images captured using a standard smart phone for vein imaging. SAMIS was built to aid doctors and nurses during intravenous injections,” said Geeve. 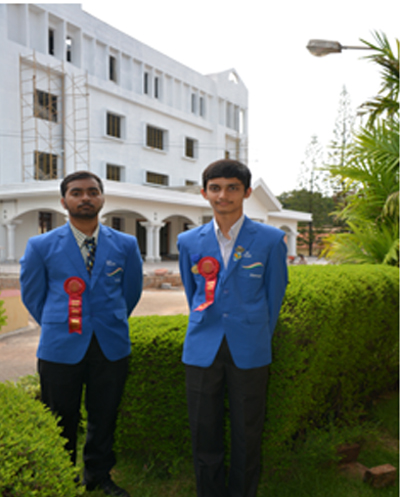 Chaitanya added, “Our project won the second place Grand Award in the bio-medical engineering category which consisted of a $1500 cash award and the Massachusetts Institute of Technology Lincoln Laboratory’s Ceres Connection Award. As a result of this award, the names of the first and second place award winners will be submitted to the International Astronomical Union (IAU) for a once in a lifetime naming of a minor planet after them.”

The management, principal and staff of Little Rock have congratulated Geeve and Chaitanya who have just completed their Class XII at the school for this remarkable achievement and wished them many more such breakthroughs in the future.