Earlier when second PUC results were declared, Samhitha got 100 marks each in Physics, Chemistry, Mathematics and Biology, 97 marks in Kannada and 90 marks in English. Not satisfied with the English marks, she applied for revaluation which fetched her 6 more marks. 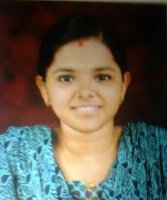 In CET conducted by KEA, Samhitha got 6 th rank in BSc (Agri), 23rd rank in ISMH, 38 th rank in Vet Science and 61st rank in Engineering.

Samhitha had the same experience even in SSLC. She became the state second topper after revaluation.

One more student of Sharada PU college, Asha Shenoy also got 6 more marks in English with her total elevated to 592/600 making her fifth topper in the state.

There are many such evidences where deserving students do not get marks due to improper valuation and no one including the media recognizes the achievements of these students when compared to the students who get the top marks during the declaration of results itself. For none of their mistake, these students have to undergo the disappointment, pain and the process of revaluation.