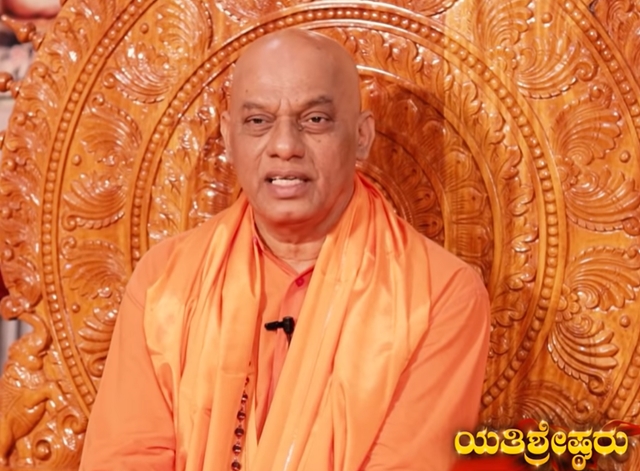 DW: Swamiji, tell us about Shri Rama Kshetra and its branches in the country.

Swamiji: Known as 'Ayodhya of Dakshina', Shri Rama Kshetra Mahasamsthana, Nithyanandanagara, Kanyadi, Dharamasthala has gained recognition globally. It has a unique position in the country. There is a saying that when Lord Rama came to the south in search of Sita, this land was the land of 'Rishis'. Thus, for one day, Lord Rama had stayed in this place and performed various rituals. Avadhoota Nithyananda Swami of Ganeshpuri in Maharashtra also came here and performed penance.

Later, my 'Deekshe' guru and founder of this Kshetra Mahasamsthana met Nithyananda Swami and he told my guru to go to Kanayadi and construct a Ram Mandir. Initially, he did not know where to construct the temple. Hence, in Pajiradka he performed puja and other rituals in a small structure. A Brahmin family had donated this one acre of land to my guru. Later, he purchased other parts of the land. Swamiji planned to construct a temple for Lord Rama and collected Rs 11 as a donation from people by traveling throughout the country. It took 20 years to complete the work of the temple. This temple was constructed in north and south Indian styles. Kashi Math Swamiji made 'Prathesta' of the temple in 2006. My guru was worried that he had no disciple. At the time, I was wandering in the Himalayas. I met him, and he asked me to come to Kanyadi. I was practicing law. He asked me to come as 'Sanyasi' for the temple.

DW: Where were you born?

Swamiji: I was born in Shamboor in Bantwal taluk. I completed my education in Shamboor primary school, high school in SVS Panemangalore, and degree in SVS College, Bantwal. I obtained law degree from SDM Law College, Mangaluru. 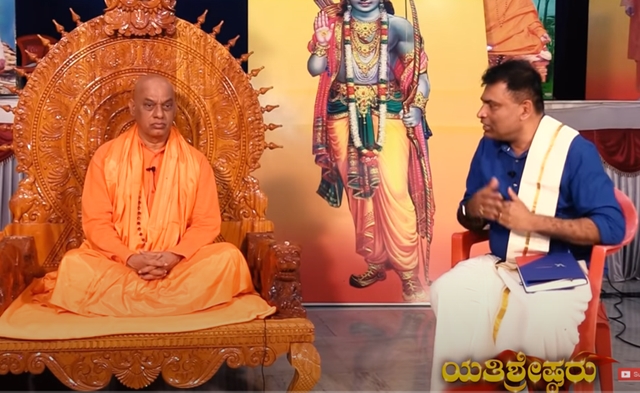 DW: What kind of atmosphere did you have at home?

Swamiji: My father was in the Himalayas for 20 years. He lived in a joint family. He did his degree during the days of the British government. Later, when he returned home, his family members made arrangements for his marriage. Even after his marriage, he went to the Himalayas. He considered Avadootha Nithyananda Swami as his guru. Shivananda Swami was also his guru. But Nithyananda Swami told my father, "You are married, stop wandering and go back to your home and lead a life". He directed my father to work as a teacher. My father later left his job as a teacher and involved himself in agriculture. Though he was married, he was 'Sadak', involving himself in meditation, yoga, and other practices. Several seers used to come to the house to visit my father. That inspired me.

DW: How many siblings do you have?

Swamiji: We are five siblings. I have two brothers and two sisters. They are not interested in spirituality. But from the age of 13, I had the persistence to become a monk. Inspiration takes a person to extraordinary heights. Along with education.

DW: What were you doing in the Himalayas?

Swamiji: During my education, I used to visit the Himalayas. There I used to be with 'Sadaks' for months. The Himalayas is a treasure trove of spirituality.

DW: When did you obtain 'Deekshe'?

Swamiji: Initially, when I was 13 years old, my father gave me 'Deekshe'. Later, I met Avadootha Govinda Swami in Bantwal and also in Ganeshpuri. In 2008, Nithyananda Swami called me here and gave me Deekshe. After his 'Samadhi' I had to bear complete responsibility of the temple and Math.

My guru had the idea of opening 'Shaka Maths' in 9 places. Accordingly, we have taken charge of an 800-year-old Math built by Ramanujacharya in Bhatkal. Since 2017-18, a big Math is being completed with the cooperation of Mankal Vaidya. There is an ITI college in Udupi. In Honnavar we have purchased land. In Haridwar, one Jyoti Prasad Bihani of Rajasthan has constructed a temple at a cost of Rs 4 crore. In Shivamogga we purchased land. All these developments are taking place because of the devotees.

DW: What are programmes undertaken by this Kshetra?

Swamiji: We are organising a Bhajana Sapthaha during Rama Navami. Thousands of Bhajan teams will take part in this Bhajana programme. There will be a 'Rathostava' programme for five days. There will be a 'Pattabhisheka' day. All Hindu festivals are being observed here. Free mass feeding is being held all 365 days of the year. Our Ashram school is bearing the complete cost of education of single parents or orphans from rural areas. Such students, numbering nearly 400 to 450, had been pursuing their education. Later, I converted that Ashram school into an English medium residential school. There are separate hostels for boys and girls. We are teaching them yoga, meditation and other spiritual activities free of cost. Due to coronavirus pandemic, we had given a year-long holiday for the school. We are planning to resume soon.

DW: How is your relationship with your family members and friends now?

Swamiji: For a saint who imbibes complete sainthood, the entire world is a family. A saint becomes visionary through his practice and work.

DW: Swamiji, can tell us about your routine?

Swamiji: As per the 'Shastra', we should sleep at 10 pm and wake up at 3 am. We do this in our 'Chaturmasa'. Now when we are busy with various works, we cannot sleep early and rise early. You can get up at any time, but everything works only when your mind and heart are pure. I wake at 4.30 am, and till 9 am I do yoga and other practices. After 9 am I get busy with various religious rituals.

DW: Do you feel that the number of people coming forward to become 'Sanyasi' is declining?

Swamiji: Yes, everyone is going after materialistic happiness. Earlier, the education system in Gurukula used to teach how to control the senses. We should imbibe only good things from good people and not their negative qualities. The entire world is moving towards modernisation. There is no educational institution that teaches morality, values, and spirituality. In the present education system, institutions are producing literates but not the educated.

DW: Swamiji, can you share with us your moments of happiness and pain experienced in your life?

Swamiji: From age 13, my father taught me to accept everything equally. These things are a natural process. Each and everyone experiences these things. No saint should keep remembering such moments, because if he does that, he cannot walk on the spiritual path.

DW: What is your future plan? You have already opened six 'Shaka Maths'. Still, three are pending to fulfill the dream of your guru.

Swamiji: Yes, on the Kerala border there is a temple and 2 acres of land which belong to Kankanady Garodi president Chittaranjan who is also
my disciple.

DW: What was your name during Purvashrama? And who gave the name Brahmananda Saraswati?

Swamiji: In Purvashrama my name was Kamalaksha. Later, my guru changed it to Brahmananda Saraswati.

DW: What is your message to our viewers/readers?