Exclusive: 'We should teach our culture, traditions to children' - Arunananda Swamiji

Mangaluru, May 1: Sri Sri Sri Arunanandatheertha Swamiji, who hails from Tulunadu, has a Math named Mahakali Mahasansthan Sadharma Om Shakthi Pita at Rasai Shendur in Nipani. As people face severe water scarcity in the region, swamiji is providing water to the people of the village from his Math.

He is well-known for his gesture of treating everyone equally irrespective of their caste, community, and religion. Swamiji has the aspiration to serve the society in Rasai Shendur by constructing educational institutions, goshala and medical facilities. 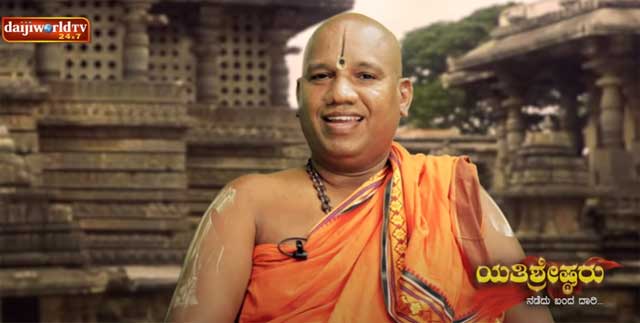 Arunanandatheertha Swamiji, in an in-depth interview with Daijiworld editor-in-chief, Walter Nandalike on Daijiworld 24x7 channel's 'Yatishreshtaru' programme, reveals what inspired him to take up Sanyasa.

DW: Swamiji, brief us about your Math in Belagavi?

Swamiji: My Math is 9 kilometres away from Nipani. It is located at Rasai Shendur. Rasai Shendur is a much backward village. I got inspired to build a Math in Rasai Shendur. After I built the Math, I found Om Shakthi Pita. Mahakaali and Kalabyrava are being worshiped there. My guru Vidhyaprasannatheertha of Subrahmanya Math also visited my Math. The annual 'Jatrosava' will be celebrated on April 25. But, due to pandemic last year, we could not organise the event.

DW: What are the social activities you have undertaken from the Math?

Swamiji: The Math has completed eight years. The government and minister Shashikala Jolle helped in the construction of 'Yatrinivas' for the visitors who come there. It is also a border area for Maharashtra and Goa. People from Maharashtra and Goa and from various other parts visit the Math. We have already started a Mahakali Seva Samithi. Religious rituals will be held. Daily there will be mass feeding. 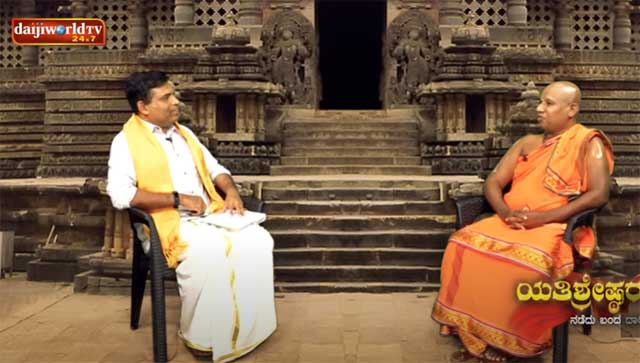 DW: Swamiji can you brief us about your 'Purvashrama'?

Swamiji: After completing my graduation, I went to Mumbai in search of a job. When I was eight, I started getting attracted to spirituality. The inspiration from Nithyananda Swamiji led me to spiritual life. I was thinking of becoming a Sanyasi in Ganeshpuri. But, my guru Vidhyaprasannatheertha Swamiji gave me 'Mantra' Deeksha. I took Deeksha at Vajareshwari in Ganeshpuri. Rasai Shendur is the native of my disciple Balu. In the initial days, when I came to Rasa Shendur, there was a scarcity of water. There was no water even to construct the Math. But, fortunately, when we dug a bore well, we found water when we reached 90-feet during the construction of the Math. Now from that bore well, we are supplying water to the people of the village. This has changed the course of the village. Speaking about my Purvashrama, I was born in Padupanambur in Mulki.

DW: Tell us about your childhood and family.

Swamiji: I was born on July 25, 1976. We were 8 children to my parents. After my birth, a Brahmin astrologer told my father that I will become a saint one day. But, my father did not want me to become a saint. So, my father removed all photos of Gods from our home, so that I should not go to Sanyasa. I came to know about this after I took Sanyasa.

DW: Swamiji, what is your educational qualification?

Swamiji: I have completed my BCom. I worked as development officer for LIC in Mumbai. I worked there for four years.

DW: When did you feel that you should get into spiritual life?

Swamiji: I came from poverty. I pursued my education using my own money earned by working in hotels. When I was working in Mumbai, I experienced a mystic energy within me. Since then, I decided to step into spiritual life. Moreover, Nithyananda Swami's message inspired me to get into spiritual life. Even in my childhood, I used to say that I will become a Sanyasi.

DW: What did your parents say when they came to know that you have entered spiritual life?

Swamiji: When I became a Sanyasi, my father was not well. My mother was not ready to accept it. She used to ask me to become a family man. Later, I convinced my mother. All my family members came to see me when I took 'Deeksha' in Ganeshpuri.

DW: In which year Subrahmanya Swamiji gave you 'Deeksha'?

Swamiji: On August 23, 2002, Subrahmanya Swamiji gave me 'Deeksha' during his 'Chaturmasa Vrutha'. We have Adi Parashakthi Chamundeshwari Temple in Kalyan of Mumbai. I founded it and I offer prayers there. We have constructed the 'Mula Math' in Rasai Shendur.

DW: How many disciples do you have at Nipani?

Swamiji: There are 10 disciples with me at Rasai Shendur. I provide education to orphan children. There is no proper education facility in Rasai Shendur as students have to travel several miles to reach school.

DW: What is your vision? Any social programmes in the future?

Swamiji: I do not own much land in Mumbai and Bengaluru. Hence, I wanted to do something good for the society in Rasai Shendur. I have the ambition to start a school, goshala, and medical facilities in that place. I aspire to open my Math’s branch in Dakshina Kannada.

DW: What was your name in Purvashrama?

Swamiji: My name in Purvashrama was Arun Kumar.

DW: Swamiji, can you share with us, the moment of extreme happiness and pain in your life?

Swamiji: The happiest moment in my life was when water gushed out while drilling the bore well in my math because there was a huge scarcity of water. Pain is when I see children leaving my Math after their education.

DW: What were the difficulties people faced in Rasai Shendur during the first wave of the Covid-19 pandemic?

Swamiji: People faced several difficulties. They were not allowed to enter the state during the lockdown. I used to receive a lot of phone calls. When I visited the border area, I saw that people’s condition was horrible. Then I asked a Hindu organization to help them.

DW: Have you received any grants from the government?

DW: What is your message to our viewers and society?

Swamiji: India is a land of rich culture and tradition. We should protect that culture and the tradition. Mobile phones in the hands of children will adversely affect their minds. As writer Shivaram Karanth told we should make children as an asset for the society. The essence of all religions is the same. Without humanity, we cannot become human. Hence, we should teach good culture to our children from their childhood. Teach our culture to the children. Instead of giving them mobile phones, tell them stories of India’s freedom struggle.

DW: What is your message to the people of Tulunadu?

Title: Exclusive: 'We should teach our culture, traditions to children' - Arunananda Swamiji