New Delhi, Jul 21: Amid a reported rift in the Congress's Karnataka unit, party leader Rahul Gandhi asked its state President D.K. Shivakumar and Leader of Opposition Siddramiah to iron out their differences and work together for the party, sources said.

The meeting with the two state leaders was attended by party General Secretary K.C. Venugopal and party spokesman Randeep Surjewala.

Ahead of the meeting, Siddaramaiah denied any rift and said both he and Shivakumar are working together to build the party. "I have been asked to meet Rahul Gandhi," he said. 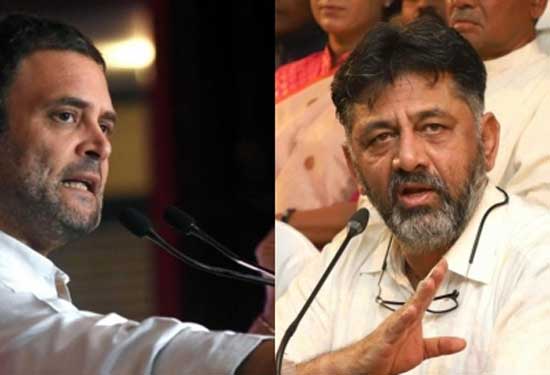 The leaders discussed the matter of current happenings in the state and dispute over who would be the next chief minister. The two were asked not to allow such issues to take prominence. "Both of you are senior leaders backed by rich experience. Your immediate aim should be to bring the party back to power in the state. Keep your fans and close ones under check. Keep away from factional or dissident activities," they were told, sources stated.

The national leadership of the Congress feels that there is a favourable environment for the party in Karnataka now. They feel that many developments taking place within the BJP have thrown up opportunities for the Congress to wrest initiative and surge ahead. The leaders were asked to make use of the opportunities and move closer to the people, strengthen the party and take all the age groups into confidence towards getting back power in Karnataka.

"Never allow internal bickering. The Congress has always given prominence to collective leadership and the election will be fought on this principle. Future course of action will be decided at an opportune moment," the party leadership advised the two.

The two leaders are said to be at loggerheads over various issues and the rift has widened when Shivakumar snubbed Siddaramaiah supporters when they projected him as the next Chief Minister of Karnataka.

The latest issue between them is illegal mining, with both differing on the issue raised by Independent MP Sumalatha Ambareesh.

Siddaramaiah stressed that an investigation should be done, while Shivakumar maintained that there are no reports of illegal mining in the region.

With inputs from IANS