CM appeals to DKS, Siddaramaiah to end padayatra in view of Covid

Bengaluru, Jan 13: Even as the State Government has issued orders to ban the Congress party’s padayatra on the Mekedatu issue from entering the city, Chief Minister Basavaraj Bommai has urged both KPCC Chief DK Shivakumar and Congress Opposition Leader in the Assembly Siddaramaiah to end their padayatra in view of the surge in Covid cases.

Releasing copies of his personal appeal to the Congress leaders, the Chief Minister promised to take all necessary measures for the Mekedatu project by taking opposition leaders also into confidence. 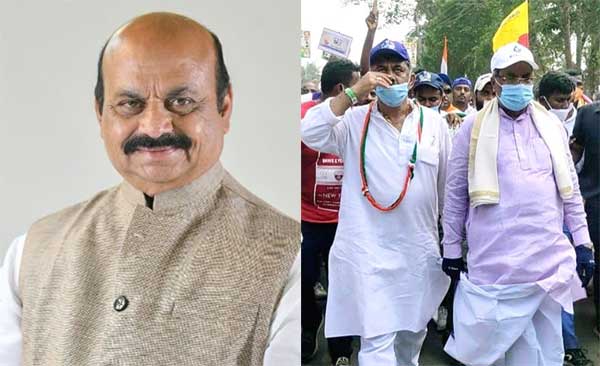 Pointing to the prevailing situation Bommai said: “The third wave of Corona which is proving to be severe has affected the people, especially the children. Under the prevailing circumstances it is not appropriate in the interest of public health to conduct programmes like Padayatra by gathering the people."

Already the Honourable High Court too has strongly expressed a similar view and it is also the public opinion, Bommai said.

"Therefore I appeal to you to give up the continuation of your Padayatra. Let us together face the Corona and in the coming days all of us shall unitedly take measures for the implementation of the Mekedatu project," Bommai said.

Meanwhile, Congress MLA Rizwan Arshad, who is in charge of party’s social media, has announced that the padayatra has been 'temporarily kept on hold' and will be continued later from Ramanagara.

It is not clear whether the decision to put the padayatra on hold temporarily was in response to the Chief Minister’s appeal or not.

Title: CM appeals to DKS, Siddaramaiah to end padayatra in view of Covid