Chikkamagaluru, Jan 13: The officials of the local municipality have been raising boards at various spots in the town to warn people habituated to throwing garbage in public places at will. The municipality has been creative in its own way in its bid to hit the right nerve or sentiment.

The warning content includes, "Lord Shani will come after you the moment you litter here, people who throw waste will lose their limbs and become beggars, litterers will be haunted by spirits in their dreams, your bad times begin from the moment you throw garbage" and so on. Municipal commissioner Basavaraj is hopeful that the spiritual beliefs or the fear of the unknown will be able to instill a sense of responsibility in the citizens or atleast scare them. 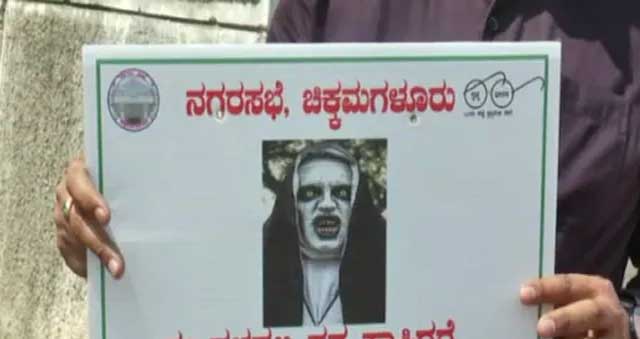 There are 25 auto rickshaws riding around the town 12 hours a day collecting garbage from the houses everyday. But the lazy ones, late to rise, have a bad habit of throwing the garbage at will. To discipline the garbage offenders , the municipality has come up with this novel plan.

In addition to 150 designated garbage points, boards have also been planted at various spots where the garbage is illegally disposed of. The municipal commissioner has pleaded with the people not to throw waste in public places as the beauty of the town is ruined and the public will have health issues. Before this, the officials had undertaken door to door visits asking people to dispose of waste only through municipal garbage vehicles.

Announcements were made through mounted loudspeakers on vehicles but people never were incorrigible. They started carrying waste in their vehicles and threw them anywhere on the way. As a last resort, the officials have chosen to threaten the people with bad omens, the divine and the unknown. The municipality hopes the plan will succeed.

In some places, photos of deities with Rangoli near them have been placed with a request not to throw waste. New teams have now been formed to monitor progress. The people have been warned that the civic amenities provided to their houses will be withdrawn if they throw garbage in open places. Meanwhile, the very people warned have been lauding these methods. As for the municipality officials, it's fingers crossed!