After Mekedatu, Karnataka Congress to take up padayatra on Mahadayi

Belagavi (Karnataka), Jan 18 (IANS): The Karnataka Congress which has organised Mekedatu padayatra (foot march) despite curfew orders is all set to launch another foot march demanding implementation of the Mahadayi project.

Karnataka Pradesh Congress Committee Executive President Sathish Jarakiholi has made an announcement in this regard on Tuesday in the state's Belagavi district.

The neighbouring state of Goa is objecting to the implementation of the project. 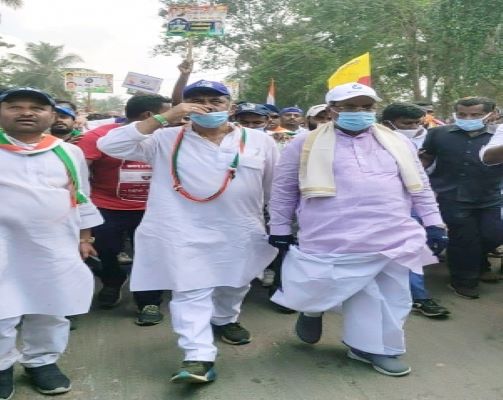 The padayatra would be taken up from the Nargund in Gadag district to the birth place of Mahadayi River near Kankumbi in Belagavi district.

The blueprint for the padayatra would be ready soon. Padayatra's demanding implementation of the Mekedatu project was a success. The foot march has successfully got the attention of the government on the issue, he said.

The sharing of the waters of the river Mahadayi is a cause of disputes between the states of Karnataka and Goa. The Mahadayi Water Disputes Tribunal (MWDT) is a tribunal which adjudicates the dispute over River Mahadayi water allocation.

The Karnataka government proposes to divert some water from the Mahadayi River to the Malaprabha River basin as part of the Kalasa-Banduri Nala project.

In August 2018, Mahadayi Water Tribunal verdict permitted Goa to use 24 tmcft (excluding the 9.395 tmcft prevailing uses), Karnataka to use 5.4 tmcft (including 3.9 tmcft for export outside the basin) and Maharashtra to use 1.33 tmcft for consumptive purposes.

Karnataka approached the Supreme Court alleging injustice is done in allocation of water to the state. Central government issued a gazette notification on February 27, 2020, permitting the Karnataka state to draw 13.42 tmcft of water from the Mahadayi River out of which 8 tmcft is for power generation.

The Kalasa-Banduri Nala is a project undertaken by the government of Karnataka to improve drinking water supply to the districts of Belagavi, Bagalkot, Dharwad and Gadag.

It involves building across Kalasa and Banduri, two tributaries of the Mahadayi river to divert 7.56 TMC of water to the Malaprabha river, which supplies the drinking water needs of the said 4 districts, i.e., Dharwad, Belagavi Bagalkot and Gadag.

This project had been on paper for decades and the Karnataka government decided to implement it during then Congress Chief Minister SM Krishna's regime.

Clearance for the project was received from the Centre in 2002. The project, however, soon ran into trouble when the then BJP government of Goa headed by Manohar Parrikar raised objections to the project claiming that the project would harm Goa's flora and fauna.

Following this, then National Democratic Alliance (NDA) government which was in power at the Centre put on hold its approval and funding of the project.

Karnataka and Goa have since then been at loggerheads over the project. The project which had been put in abeyance for four years was revived after H.D. Kumaraswamy became the Chief Minister.

In September 2006, the coalition government in Karnataka headed by Chief Minister H.D. Kumaraswamy decided to go ahead with the construction work.

It was inaugurated on September 22 at Kanakumbi in Khanapur Taluk of Belagavi district. The Goa government, however, soon moved the courts and brought a stay on the construction work. The matter is now before the Mahadayi Water Disputes Tribunal.

The Congress state unit which has gained momentum after organising a foot march on the controversial Mekedatu project in south Karnataka is all set to launch another movement in north Karnataka region.

Title: After Mekedatu, Karnataka Congress to take up padayatra on Mahadayi