Koppal, Jan 23: In an exceptional gesture, a woman donated the land that was her livelihood, to a school. Now, she works as the chief cook in the same school and finds happiness in feeding the students of the school.

Ironically, Hucchamma Chowdri (75), known as the mother of mothers, is childless. She lives in Kunikeri village of the district. She was married as a child to Basappa Chowdri. However, the couple could not have any children. 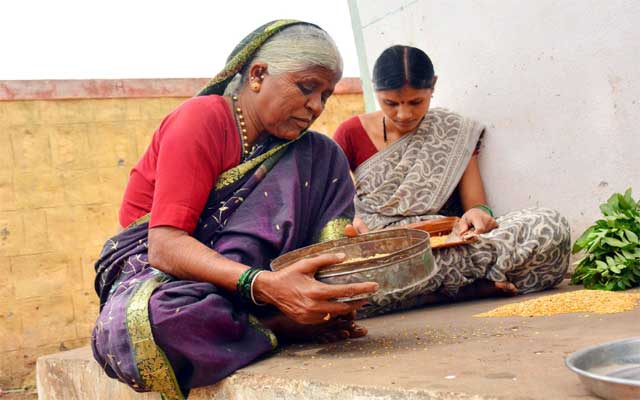 Her Basappa passed away 30 years ago. Hucchamma lived a very lonely life after she was widowed. She was doing agriculture for a living in the two acres of land she owned beside the village. In the meantime, need for a new school building arose in Kunikeri village and none in the village was ready to donate a land for the purpose. However, Hucchamma went ahead and donated one acre of her land in the beginning. But it did not stop there. Later, the need for playground at school cropped up, she willingly gave away the only other acre of land she had.

Now a well-equipped school has come up in the land donated by Hucchamma. If someone asks Hucchamma what she will do for a living as she has given all the land she had to the school, she quips that if someone provides her two square meals a day, it is more than sufficient for her. Now she works as a cook in the same school.

Hucchamma says that all the 300 children studying in the school are her children. She feeds hot meals everyday to these children. With steel factories having come up in Kunikeri village, the land prices have shot up and Hucchamma could have easily earned Rs 1 crore by selling her property. But Hucchamma has no regrets. She says that if she gets food till she is alivem, that is more than enough for her.

Hucchamma, who is 75 now, does the cooking for mid day meals in the school everyday. When the school is closed for holidays she works as a labourer. Though Hucchamma is a popular person now who is felicitated by many organizations she prefers to work as a cook and labourer.

The society, which is divided on caste and religion, needs more human beings like Hucchamma to erase inequality and bring in harmony.