New Delhi, May 14 (IANS): Hours after it imposed a ban on wheat export, the government on Saturday said it has adequate food stocks, there is no threat to food security and that the order related to wheat should not be looked at as prohibition or ban but as India's commitment to needy and vulnerable countries.

Against the first estimate of wheat production of 1,113 lakh metric tonnes (LMT) this year (2022-23), the estimate was revised to 1,050 LMT due to early summer/heat wave. Against the estimated procurement of 195 LMT, the actual procurement as of May 13 stood at 180 LMT, including approximately 75 LMT wheat containing shriveled grain. 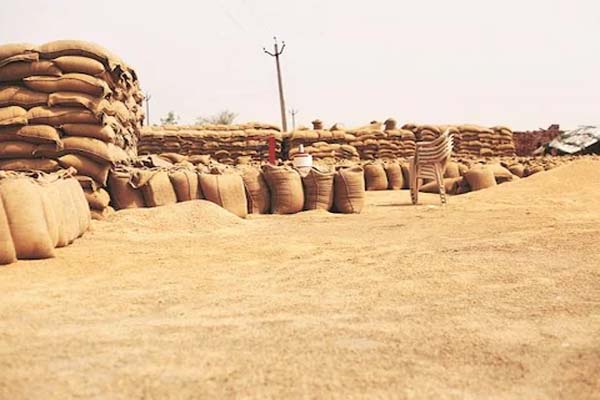 Because of these exports, the demand had increased and the wholesale and retail price of wheat and atta (ground flour) had been increasing consistently.

"PDS system covering 81.35 crore people is the backbone of food security in our country, it would be run smoothly. But this decision (of wheat export ban) has been essentially taken in view of the price rice that was happening. In several areas, the inflation is imported along with global price rice. It was happening in the case of wheat too," Food Secretary Sudhanshu Pandey told media persons.

Ahuja said there is no dramatic fall in production and termed the decreased wheat production in Haryana and Punjab as "minor. "We will know the actual production much later but before that, we will have third estimates," he said.

The government had targeted higher wheat exports and more and more countries had given market access to India in view of the Russia-Ukraine war situation. Both the countries are major wheat exporters and ever since the war broke out in end February, much of the agriculture trade, but especially wheat and sunflower oil, have been impacted globally.

"Please interpret the order not as a prohibition or ban but to divert trade to the needy and vulnerability," he said.

The top officials also shared the measures taken by the government for domestic availability of wheat and price control. As much as 55 LMT wheat has been replaced by rice in Pradhan Mantri Gareeb Kalyan Ann Yojana (PMGKAY), 61 LMT wheat replaced by rice in disbursements under National Food Security Act (NFSA), and there has been no sale of OMSS wheat.

"Exports have been permitted for only those who have a Letter of Credit. If you have a valid order, i.e., LoC, that contract will be honoured. India's reliability as a supplier will be maintained," Subramanyam said.

"Also, if you read the fine print, the order says that the government is committed to ensure first the domestic food security and then, also of our neighbours. So, the government-to-government trade is kept open. In the name of wheat prohibition, we are directing the traders to a particular direction. Trade would still be private, but the facilitator would be the government for the needy and vulnerable countries," he added.

The decision to ban wheat export can always be revisited when global prices stabilise and the Agriculture Department is comfortable with its stock positions, the top officials asserted.