Mangaluru: Shambhavi river likely to get polluted due to upcoming Balkunje industrial area

Mangaluru, Jun 26: Primary notification for land acquisition is published in order to set up an industrial zone on 1,091 acres of land at Balkunje. The survey work and objections of farmers is in the process.

If the project goes through as planned, hundreds of families will lose their livelihood from agriculture. On the other hand Shambhavi river which flows nearby will be polluted and pose serious health issues for people and environment.

Phalguni river is already polluted due to industries in MSEZ. The death of tonnes of fish in the river is the witness for this fact. Shambhavi river will meet the same fate, if the Balkunje industrial zone project gets established. 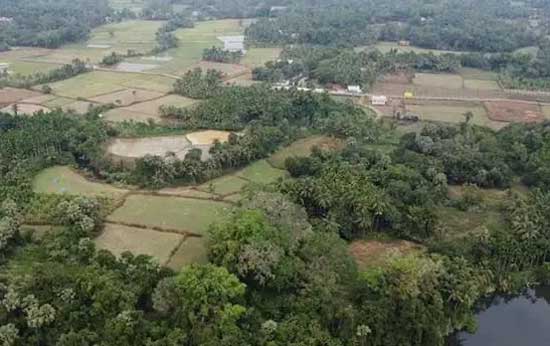 As many as 36 villages around river Shambhavi get drinking water from the river. A dam is built at Bhandasale in order to provide drinking water. The proposed industrial zone is right next to the Shambhavi river. So there is a huge chance of poisonous chemicals entering into the river. Balkunje gram panchayat president Mamata Poonja said that residents of Balkunje are vehemently opposing the project.

Environmentalist Dinesh Holla says that Shambhavi river will surely meet the same fate as the Phalguni river, which is already polluted beyond limits. This has to be stopped at any cost.

More than 90% of people are against the land acquisition at Balkunje. Denis D’Souza, president of the protest committee says that their agricultural produce was getting affected by the thermal power plant of Udupi. If the Balkunje industrial zone is established it will not be possible for them to live.

Dinesh Holla says that this scheme is to encroach land in the name of an industrial zone. Development is just a lame excuse. So he says people should unite and fight against this plot of using land for other purposes once it is acquired.