Kundapur, Jun 30: A man, driver of tractor, collapsed and died while walking near the paddy field when the work was stopped for lunch break. This incident occurred at Deeti Koggi of Keradi village.

As per complaint filed by Vijayakumar, resident of Keradi village of the taluk, he had hired a tractor to till the paddy field and accordingly tractor along with its driver Kantaraju (40), native of Harihar taluk of Davanagere district had arrived for work. 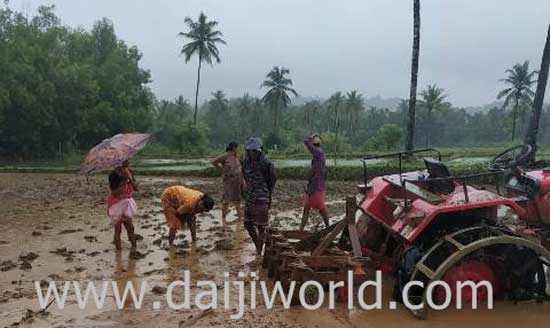 The work of ploughing the field was stopped for lunch. Complainant Vijayakumar, Narayana, Santhosh, Seethu and Ashwath were near the paddy field and getting ready to have lunch.

Deceased Kantaraju, the driver of the tractor had stopped the tractor and was coming towards others to have lunch while he collapsed suddenly. He was rushed to government hospital of the taluk where the doctors declared him brought dead. It is suspected that he had suffered a cardiac arrest.

Post mortem is yet to be done to ascertain the exact cause of death of deceased Kantaraju. A case in this regard is filed in Kollur police station.