Dubai, Aug 16: Thousands of Non-Resident Indians (NRIs) across the Gulf on Monday proudly celebrated India's Independence Day, amid the unfurling of the tricolour and distribution of sweets.

The commemoration of Independence Day and flag hoisting is customary at Indian missions. However, the display of tricolour has assumed special significance this year as it has docked with the viral 'Har Ghar Tiranga' campaign.

Numerous patriotic Indian workers engaged at different work sites have celebrated the event by cutting cakes and distributing sweets. In early morning hours several NRIs thronged to Indian missions by leaving their work aside to commemorate Independence Day and singing to the tune of the national anthem. 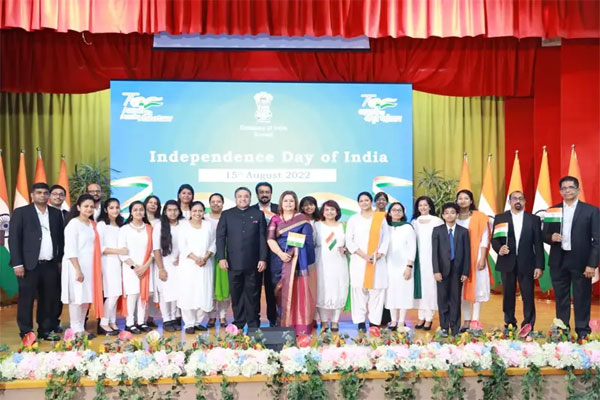 In the United Arab Emirates (UAE) where the largest number of Indian nationals live and work, Ambassador Sunjay Sudhir led the celebrations by hoisting the Indian tricolour at the Indian Embassy in Abu Dhabi. He paid floral tribute at the bust of Mahatma Gandhi.

Sudhir pointed out that under the visionary leadership of Indian Prime Minister Narendra Modi, the tricolour has gained further respect globally. He added: "Today, wearing the tricolour, or flashing the Indian passport, evokes respect for Indians."

Sudhir read out excerpts from the speech made by Indian President Droupadi Murmu.

The tricolour was also unfurled by the Consul General of India in Dubai by Aman Puri, at the Indian Consulate in Dubai.

The event marked with zeal as part of 'Har Ghar Tiranga' with a variety of programmes in Dubai despite adverse weather conditions. In the Dubai 'Marina a Yacht' that displayed the tricolour was conspicuous. In Sharjah, blue collar workers participated in an exclusive event held by the Indian Association.

In Saudi Arabia, which houses the second highest number of Indians, Indians celebrated Independence Day with enthusiasm and joy, with DCM N. Ram Prasad hoisting the national flag and paying floral tributes to the father of the nation.

The Indian employees working in a key infrastructure project in Ras Al Khair, seashore town, among others celebrated Indian Independence Day by cutting a cake and distributing sweets.

"Though away from home, we took part in 'Har Ghar Tiranga' ,'' said Riyadh-based Ch. Shiva Reddy, hailing from Hyderabad.