Indo-Saudi relationship important when world is at crossroads: Jaishankar in Saudi Arabia

He underlined the importance of India-Saudi strategic relationship at a time when the world is at crossroads, he tweeted. 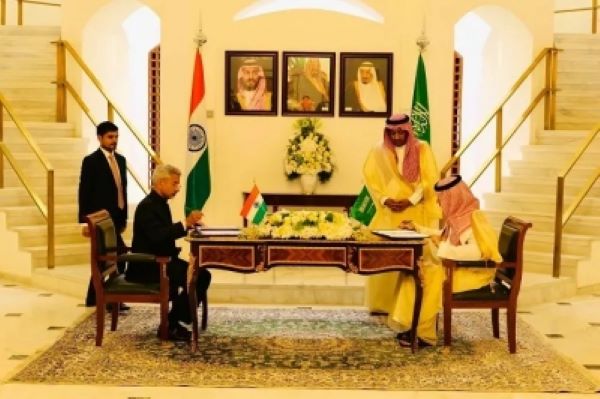 In one of rare gestures for visiting high ranking foreign diplomats, Dr. Jaishankar addressed Saudi diplomats at the Prince Saud Al Faisal Institute of Diplomatic Studies in Riyadh on Sunday.

The Indian minister was received by Dr. Adel Al Amrani, director of the institute and Saudi Ambassador to India Dr. Saud Al Sati and other senior officials.

The session was moderated by Dr. Ali Al Qarni, supervisor of Center for Asian Studies.

The Minister said that Saudi Arabia and the rest of Gulf countries are maritime neighbours of India and having historical relations.

He told the audience that there was some gap in fostering relations with these countries from the Indian side in the past, which has been rectified by Prime Minister Narendra Modi by paying special attention evident to multiple visits to some important countries such as Saudi Arabia and UAE.

Replying to a question, Dr. Jaishankar said that there is nearly 60 percent increase in Passport renewals in the country as many people didn't renew their passports during Covid-19 period. He emphasised that the number of applicants significantly increased but not the strength of personnel at offices.

He acknowledged Saudi Arabian support in terms of supplying oxygen during the pandemic.

Dr. Jaishankar said that Yoga has become global and localised according to needs of the different nations in the world including Saudi Arabia.

The minister hailed Indian Diaspora that number around 25 lakhs in Saudi Arabia by their hard working and thus making the nation brand image.

Title: Indo-Saudi relationship important when world is at crossroads: Jaishankar in Saudi Arabia