BJP says Siddaramaiah will go to jail in de-notification case

Bagalkot, Sep 26 (IANS): The BJP's state unit president Nalin Kumar Kateel has surprised political circles by stating that opposition leader Siddaramaiah will be sent to jail in the de-notification of government land case.

Talking to reporters on Monday, Kateel stated that "we will probe the Arkavathy de-notification scandal which took place during Siddaramaiah's tenure. Through the Lokayukta as many as 52 cases will come out in connection with the scandal and those who are involved in the scandal would be sent to jail." 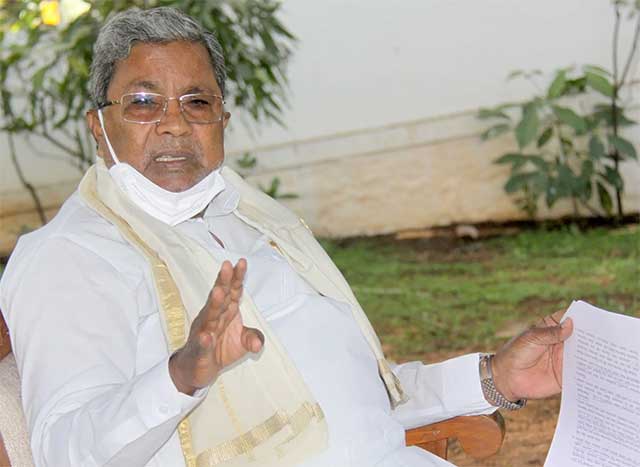 "Former CM Siddaramaiah will also land in jail," he underlined. "During its tenure the Congress government was involved in widespread corruption. Not only the Arkavathy land scandal, there are illegalities in the purchase of pillows, beds. Why have the scandals of the Congress party not been investigated?" Kateel questioned.

The documents relating to the scandals that took place during the tenure of Siddaramaiah have been concealed. "We have to struggle a lot to dig them out," he stressed.

He asked Siddaramaiah why did he close down the Lokayukta during his tenure as the CM? Siddaramaiah ruled with the support of the sand mafia and drug mafia. After B S Yediyurappa became the CM, the drug mafia was confronted and reputed personalities were put behind bars, he added.

He stated that records are being gathered in connection with the banning of the Popular Front of India (PFI) and the Social Democratic Party of India (SDPI). He blamed Siddaramaiah for the growth of the SDPI and the PFI in the state. "He had taken back cases against the SDPI and PFI workers accused of serious crimes. If they had been put in jail, the situation would have been different in Karnataka," Kateel said.

Siddaramaiah is directly responsible for the spread of terror activities in the state, he alleged.

Siddaramaiah and the Congress party have launched an offensive against the ruling BJP especially Chief Minister Basavaraj Bommai through the PayCM poster campaign. Siddaramaiah recently said that he has studied law and knows that no legal action can be taken against him.