Udupi, Oct 19: “The gap that is emerging between the old modes of journalism and the new media platforms is also eroding public trust in the news industry, with social media appropriating to itself the role of the arbiter of the trustworthiness and credibility of news content and content providers, in other words, news organisations,” said Dr Malini Parthasarathy, chairperson, The Hindu Group Publishing & director, editorial strategy. 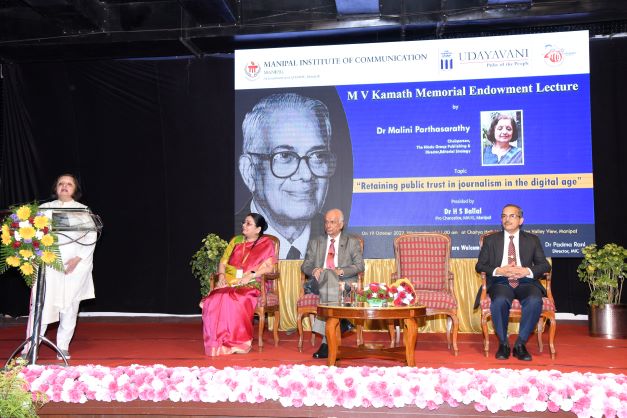 Delivering the M V Kamath Endowment Lecture organised by Manipal Institute of Communication (MIC), Parthasarathy said unlike in past decades, when star editors were able to fascinate their reading public with their analyses and punditry, and when readers were in thrall to editorialists offering judgment, savouring the news reports on every page of the newspaper, now we are faced with a young, aspirational, and globally minded audience that wants to be informed rather than educated. It found that many publishers and journalists felt that digital platforms were at least partly to blame for declining levels of trust in news in many places around the world, she added.

She said some worried that platforms enable "bad-faith criticism of journalism to circulate more easily and insidiously while polluting the information environment with low quality substitutes for factual reporting". Others saw platforms as undermining news audiences' connections with their brands even as they often saw digital media intermediaries as essential to reaching segments of the public least likely to tune in through legacy modes such as print or broadcast. In India, 58 percent of the respondents believe that journalists manipulate the agenda to serve powerful politicians and 57 percent care more about getting attention than reporting the facts, she maintained. She also praised the veteran journalist's contributions, emphasising his simplicity.

Manipal Academy of Higher Education (MAHE), pro-chancellor Dr HS Ballal recalled his memories of veteran journalist MV Kamath, adding that he was indispensable in the world of journalism.