Hyderabad, Nov 12 (IANS): Leaders and activists of the Left parties were arrested by police in Telangana for staging a protest against Prime Minister Narendra Modi's visit.

The protests were organised in Hyderabad and Peddapalli district against Centre's "discrimination" towards Telangana and its "failure" to fulfill commitments made to the state. 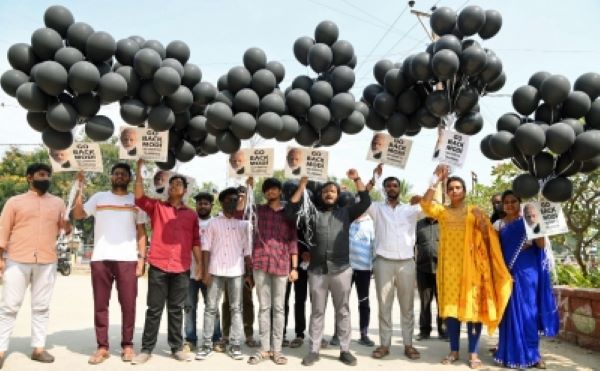 CPI national secretary K. Narayana was among those arrested in Hyderabad. Dressed in black and raising slogans of 'Modi go back', the protesters staged a demonstration.

Holding placards with slogans of 'Go back Modi', the protesters from 'Chenetha Youth Force' released black balloons at KBR Park in Hyderabad to protest the Prime Minister's visit. They were protesting the GST imposed on handlooms.

After arriving at Begumpet Airport in Hyderabad, the Prime Minister left for Ramagundam to inaugurate the Ramagundam fertiliser plant.

Protests were also organised by the Left parties and employees unions of Singareni Collieries Company Limited (SCCL) in Peddapalli district to oppose the Centre's move to privatise coal blocks.

Posters, banners and flexis have also come up in Hyderabad and in Ramagundam questioning the Prime Minister about commitments made to Telangana at the time of bifurcation of Andhra Pradesh that are yet to be fulfilled.

One of the banners questioned the Prime Minister as to what happened to the promises made to Telangana including Information Technology Investment Region (ITIR), textile park, defence corridor, Kazipet rail coach factory, Bayyaram steel plant, turmeric board and tribal university.

'No entry' posters with the Prime Minister's photograph have also been pasted at various places, opposing five per cent GST on handloom.

Wearing black badges and raising slogans, they staged protests in Mandamarri, Bellampalli, Srirampir, Godavarikhani, Kothagudem and other places. They were demanding the Centre to drop its move to privatise coal blocks.

The Left parties had called for protest demonstrations in all the constituency headquarters across the undivided Khammam district.

The Communist leaders have alleged that the Centre is depriving Telangana of its due share in taxes levied by it.

Their protest is also against anti-worker and pro-corporate policies pursued by the Modi government as part of its aggressive privatisation drive.