Bengaluru, Jan 21 (IANS): Reacting for the first time on the aircraft's emergency door opening incident, Bharatiya Janata Party (BJP) MP from Bengaluru South, Tejasvi Surya on Saturday said a clarification on the matter has already been provided, and he will "not further glorify the criticism of the Congress".

While the airline -- IndiGo, did not name the passenger, some passengers travelling on the same flight had claimed that it was Tejasvi Surya. The BJP leader, however, had maintained a silence on the issue.

Speaking to reporters on Saturday after flagging off Namo Charity Run in Bengaluru, Surya said the airlines and the DGCA have given clarification regarding the incident. 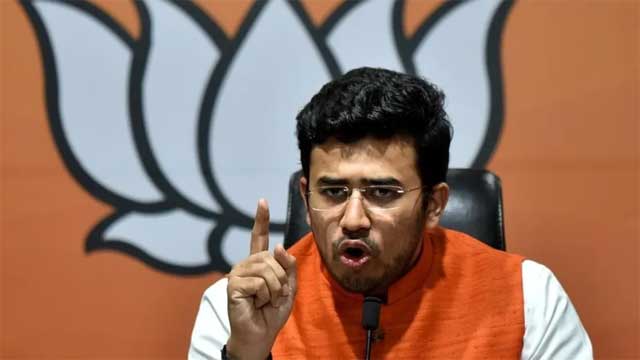 "The Union Minister for Civil Aviation has explained that it was an incident that took place accidentally. K. Annamalai, the Tamil Nadu BJP president who was travelling with me also explained what exactly happened. Two other passengers have also given clarification over the incident," he said.

"I don't want to react in the backdrop of criticism from the Congress party or someone asking something, and glorify their criticism," MP Tejasvi Surya claimed.

A controversy had broken out recently after IndiGo Airlines had released a statement that a passenger had opened the emergency door of its Chennai-Tiruchirapalli flight on December 10, 2022 leading to a two hour delay in the flight departure.

Civil Aviation Minister Jyotiraditya Scindia confirmed on Wednesday (January 18) that the door was opened last month "by mistake", and the person who opened it has apologised.

IndiGo had said on Tuesday that a passenger accidentally opened the emergency exit of a plane at the Chennai airport on December 10. The passenger had apologised, said the airlines.

While the airline did not name the passenger, few opposition parties have reacted on the matter, claiming that the person responsible for the act is Tejasvi Surya.

Without naming Surya, the Civil Aviation Minister on Wednesday confirmed that the passenger who by mistake opened the emergency exit, leading to a two hour delay of the flight, has apologised for his act.

"I won't respond to what the opposition is saying. It's important to look at the facts. The door was opened by him by mistake when the flight was on the ground and after all checks, the flight was allowed to take off," Scindia said.