Congress is ‘varsity of corruption,' closed Lokayukta to save itself: CM

Bengaluru, Jan 23: Chief Minister Basavaraj Bommai on Monday launched a frontal attack on the erstwhile Congress government in the state and said ‘’Congress is the 'varsity of corruption'.

Lambasting the Congress party for its protest in Bengaluru on ‘’Stop corruption, Save Bengaluru,’’ the chief minister alleged that the previous Congress government had closed down Lokayukta to bury the scams under its rule and save itself.

Terming the Congress party as the 'varsity of corruption', Bommai claimed that he has the "documents of 60 per cent premium paid in Bengaluru in the Siddaramaiah government.’’ 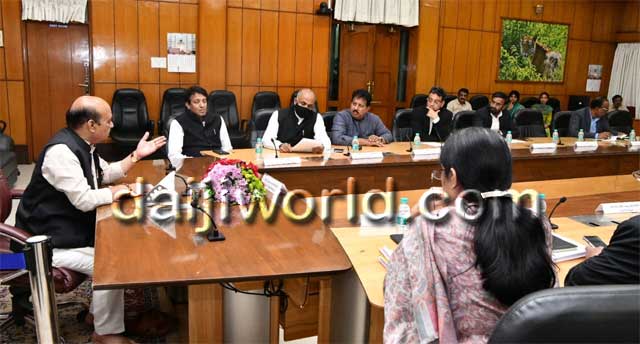 "There is no instance of paying 60 per cent premium worth Rs 800 crore in the entire country. Having done corruption on 40:60 ratio, now they talk of corruption and it is being done to cover-up their mistakes,’’ he charged.

The government has filed a complaint with the Lokayukta and let the Congress leaders give details to the anti-corruption institution, he said.

The chief minister said those who closed the Lokayukta are holding protest at over 300 places in the State and they are now giving lessons.

"Why did they close down Lokayukta? A number of cases had been filed against 59 persons including the then chief minister so they started the Anti-corruption Bureau (ACB) and got a 'B' report filed in all cases. All those cases are now referred to Lokayukta. Corruption had been part of the previous government,’’ Bommai said adding, "they are protesting to cover-up their misdeeds. It's a joke that the Congress leaders talk about corruption.’’

Referring to Congress party comparing Prime Minister Narendra Modi to Hitler, Bommai said people know what Modi has done and criticising him is like "spitting in the air. It will fall on them.’’

When AICC President Sonia Gandhi termed Modi as "Maut Ka Saudhagar,’’ the BJP came back to power with more number of seats in Gujarat, he said predicting a BJP victory with clear majority of over 150 seats in the State.

Title: Congress is ‘varsity of corruption,' closed Lokayukta to save itself: CM