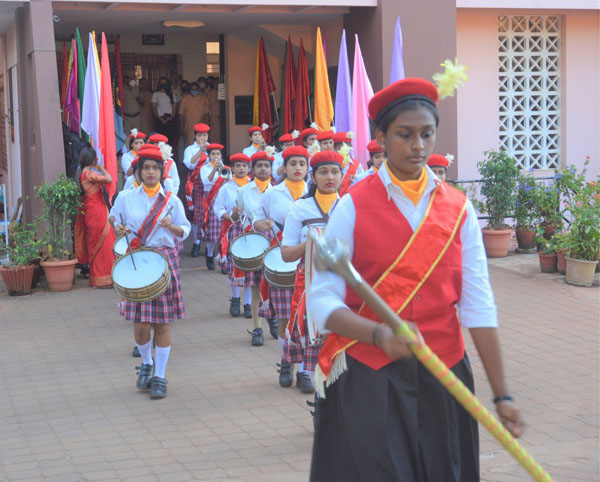 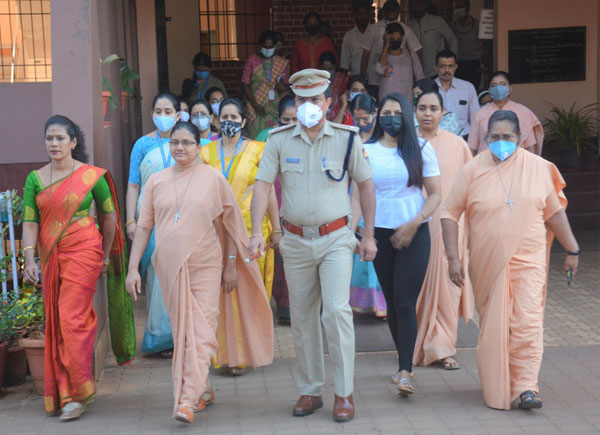 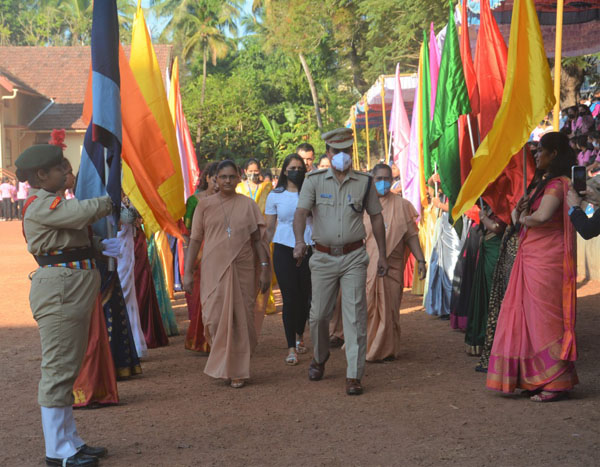 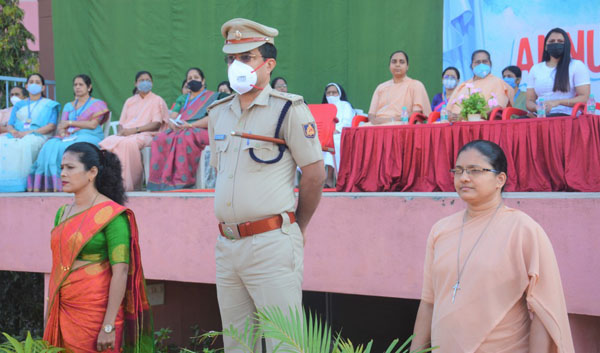 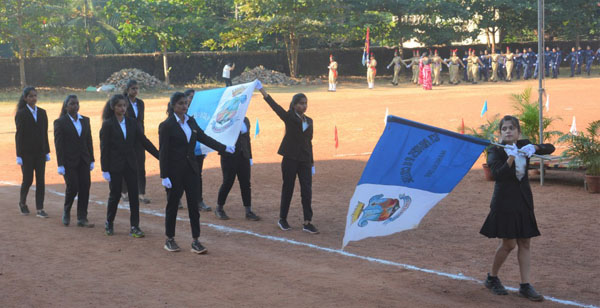 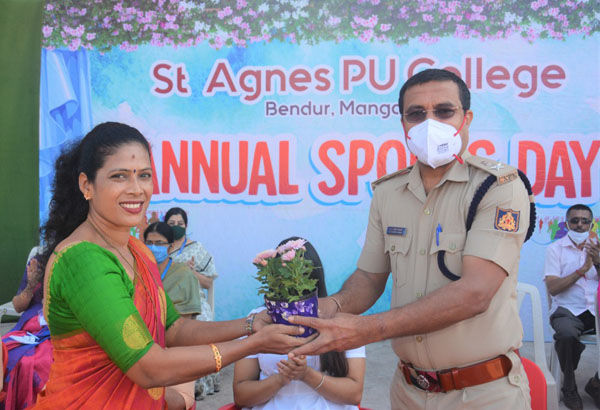 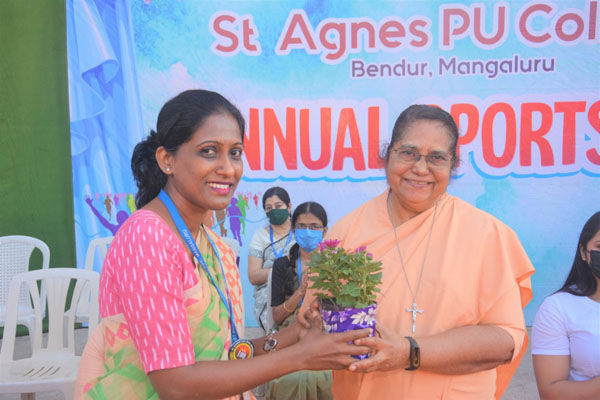 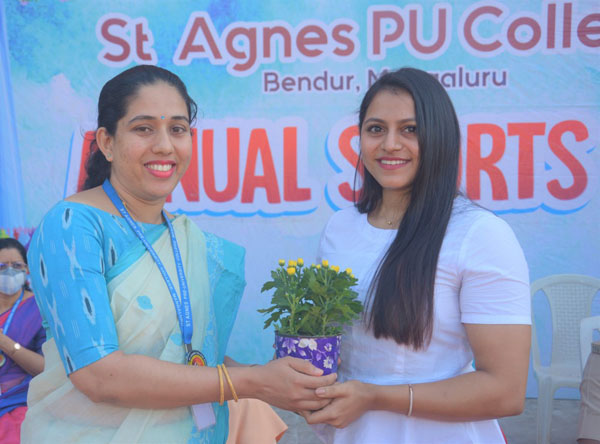 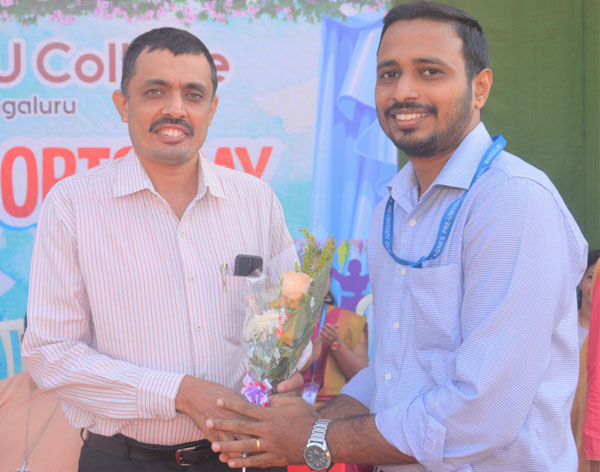 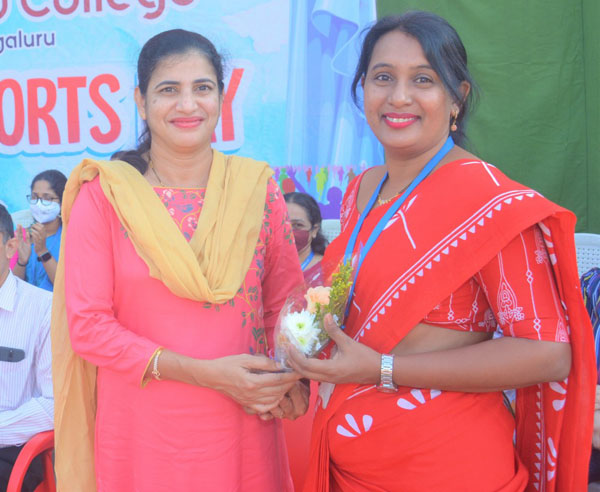 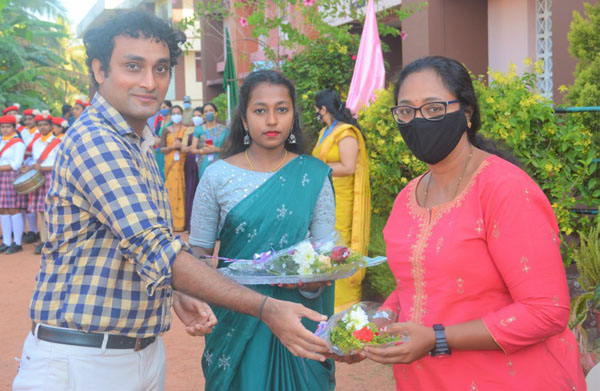 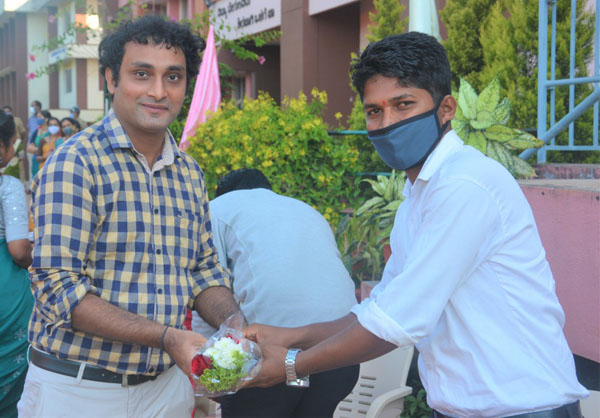 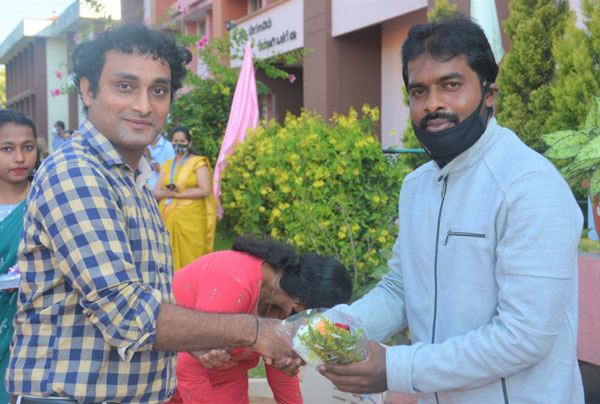 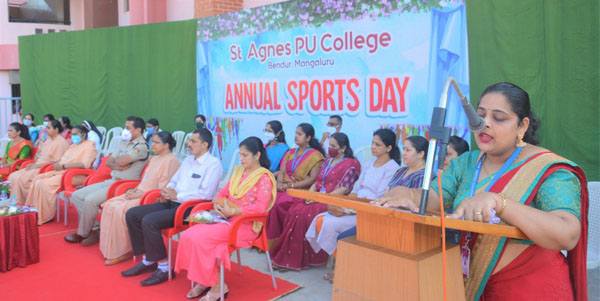 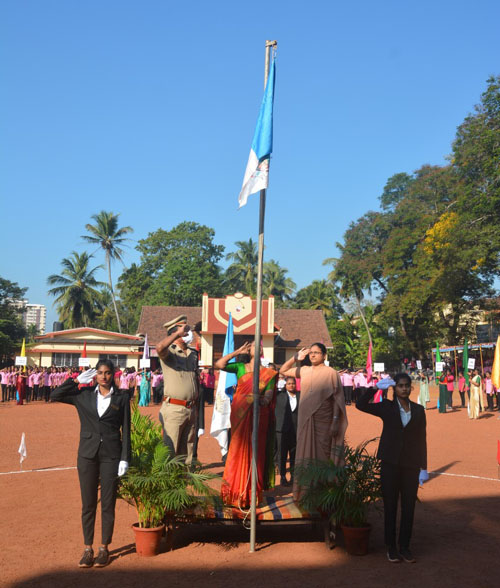 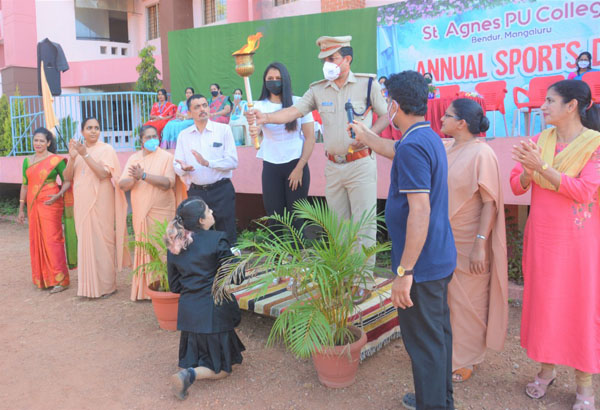 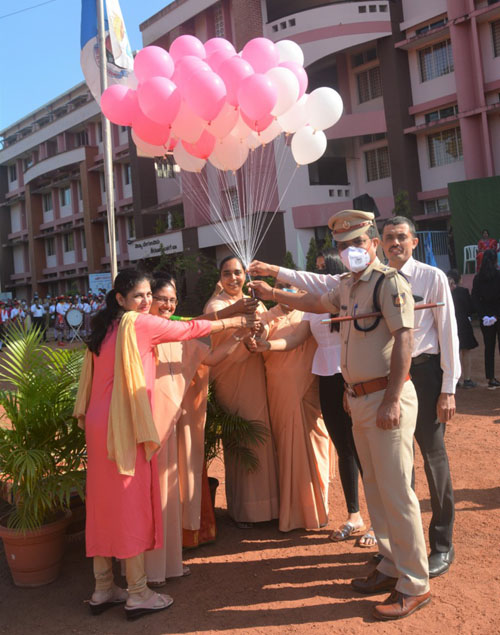 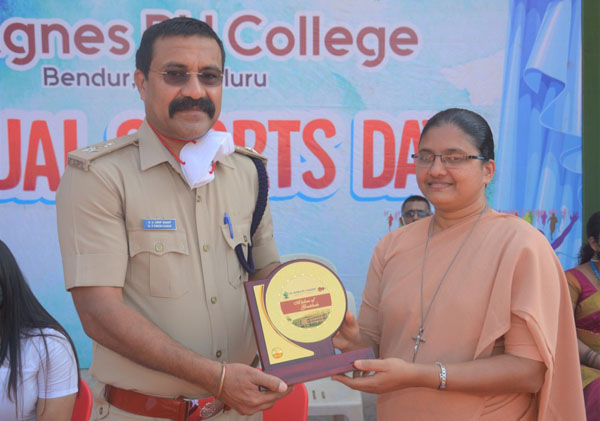 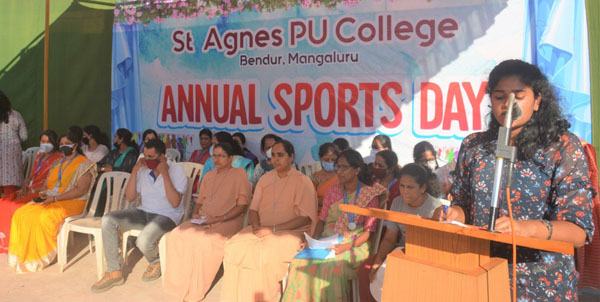 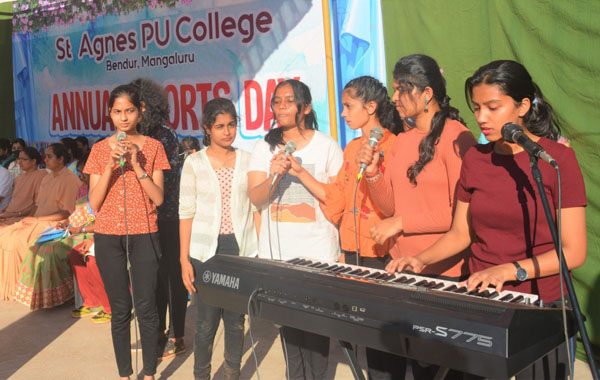 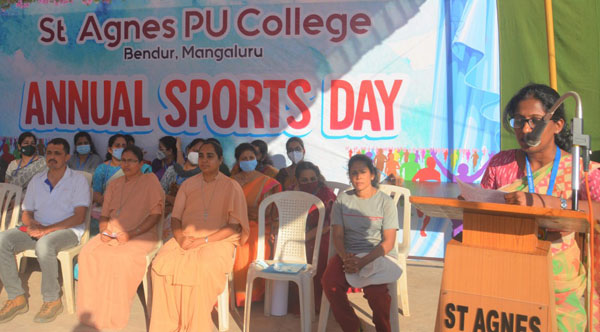 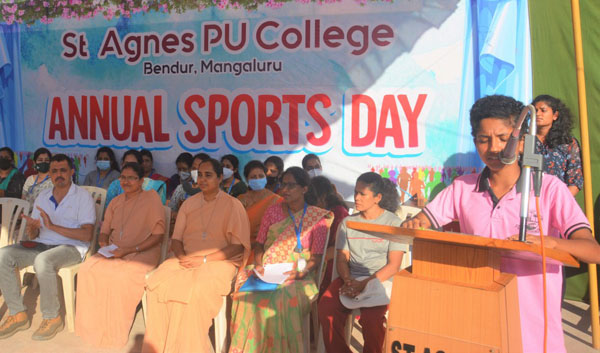 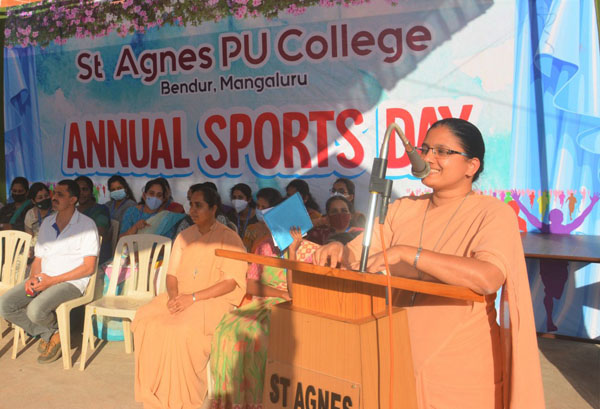 Olivia Patrao, lecturer in Economics introduced Dinesh Kumar, the chief-guest and the gathering thereafter, Jayashree introduced the marching teams to the esteemed guest after which the college flag was hoisted. Dinesh Kumar in his address motivated the students to be confident, positive and display the spirit of sportsmanship. He appreciated the college band and marching teams for their disciplined and synchronized marching. He exhorted everyone to work towardscreating a covid - free environment.

Venizeia Carlo who won 2021 Open, sub junior and Masters Asian Classic and Equipped Powerlifting and Benchpress Championship, Istanbul, Turkey was proudly felicitated by the college on this occasion. This was followed by the torch relay where the national and international level players along with Nicole, the Sports Secretary handed over the Olympic torch to Dinesh Kumar after which he declared the Annual Sports Meet, 2021-22 of St Agnes PU College open. Sr Dr Lydia Fernandes and the other dignitaries released the balloons to mark the occasion. The teams entered into a spirit of true sportsmanship with the oath being administered by Nicole Mathias.

The inaugural programme was compered by Sheryl Sequeira and Abra Ameer while Riona proposed the vote of thanks.

Thereafter, the events of the day began and all the students actively participated in the sporting extravaganza with zeal and enthusiasm.

The closing ceremony was held in the evening. Sharol Chrissel Dsouza welcomed the gathering. The winners of the various events were awarded by SrNorine, the principal. II PUC PCMB - ‘C’ batch was awarded the runners-up trophy and the overall championship was bagged by I PUC PCMC/E/S–‘D’ Batch. The Annual Sports Meet was then declared closed by the principal. The college flag was then lowered respectfully and was handed over to the principal. Vismaya compered the valedictory programme and thanked all those who had toiled for the success of this Sports Meet. The spectacular day came to a close with the rendering of the National Anthem.