Baghdad, Jul 31 (IANS): Hundreds of followers of Shia cleric Moqtada al-Sadr started an open sit-in inside the Iraqi parliament building in central Baghdad, while his political opponents called on their supporters to prepare for a counter-protest.

"The people choose the open sit-in in the parliament," Ibrahim al-Jaberi, Head of al-Sadr's office, wrote on Saturday on his Facebook page.

Earlier on Saturday, hundreds of al-Sadr's followers broke into the Green Zone, which houses the main government headquarters, residencies of some top political leaders and some foreign embassies, and entered the Iraqi parliament building for the second time in three days. 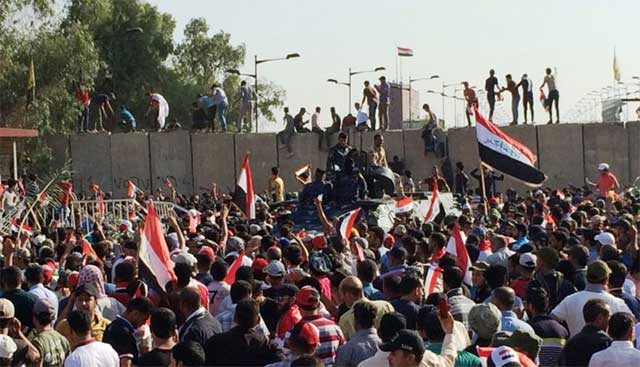 A statement by the Iraqi Health Ministry said that up to 100 people and 25 security personnel were wounded when security forces tried to prevent the demonstrators from entering the Green Zone, Xinhua news agency reported.

In a statement, Iraqi President Barham Salih urged everyone to keep calm and resort to dialogue to ensure the country's security and stability and consolidate its civil and social peace.

In a televised speech, Prime Minister Mustafa al-Kadhimi called on everyone "to be calm, patient, and rational, and not to be drawn into confrontation".

"We must all cooperate to stop those who accelerate this sedition, and everyone must know that the fire of sedition will burn everyone, so the political blocs must resort to negotiation for the sake of Iraq and the Iraqis," he said.

Later in the day, dozens of al-Sadr's followers continued to enter the Green Zone to participate in the public sit-in inside the parliament building.

Meanwhile, a statement issued by al-Sadr's opponents in the Coordination Framework, an umbrella group of Shia parliamentary parties, called on "the people who believe in the law and constitutional legitimacy to demonstrate peacefully in defence of the state, its legitimacy, and its institutions."

For his part, Parliament Speaker Mohammed al-Halbousi announced in a statement the suspension of the parliament sessions "until further notice," calling on all leaders and political blocs to gather for an urgent national meeting.

On Wednesday, hundreds of al-Sadr followers broke into the parliament building after the Coordination Framework, an umbrella group of Shia parliamentary parties, nominated Mohammed Shia' al-Sudani on Monday for the post of Prime Minister.

The Coordination Framework became the largest alliance in the Iraqi parliament after al-Sadr ordered his followers in the Sadrist Movement, the biggest winner in the elections held on October 10, 2021, with 73 seats, to withdraw from the parliament.

During the past months, the continued dispute among the Shia parties have hampered the formation of a new Iraqi government, as the parliament has been unable to elect a new President by a two-thirds majority of the 329-seat parliament under the constitution.

The President, if elected, will appoint the Prime Minister nominated by the largest alliance in the parliament, the Coordination Framework, to form a new government that would rule the country for the coming four years.