Baghdad, Aug 4 (IANS): Iraqi prominent Shiite cleric Moqtada al-Sadr called for dissolving the parliament and holding early elections, urging his followers to continue their open sit-in in the Parliament building until their demands are met.

"Most of the Iraqi people are tired of the ruling class, including some faces of the Sadrist Movement," al-Sadr said in a televised speech. 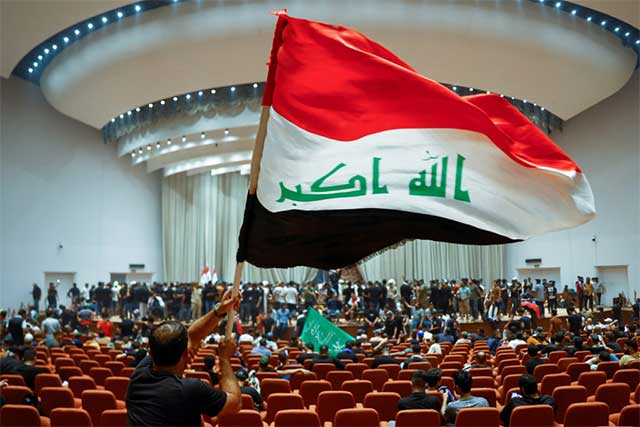 "The revolution (protests for comprehensive reform) began by the Sadrist, and it will not exclude the corrupters from the Sadrist Movement," al-Sadr was quoted as saying by Xinhua news agency.

"I am not asking for power, but I am seeking reform," the Shiite cleric concluded.

On Saturday, thousands of al-Sadr's followers began an open sit-in in the parliament, rejecting the nomination of Mohammed Shia' al-Sudani as the country's Prime Minister on July 25 by al-Sadr's opponents in the Coordination Framework (CF), an umbrella group of Shiite parliamentary parties.

The CF became the largest alliance in the Iraqi parliament after al-Sadr ordered his followers in the Sadrist Movement, the biggest winner in the elections held on October 10, 2021 that secured 73 seats, to withdraw from the parliament.

During the past months, the continued disputes among the Shiite parties have hampered the formation of a new Iraqi government, making it unable to elect a new president by a two-thirds majority of the 329-seat parliament under the constitution.

If elected, the president will appoint the prime minister nominated by the largest alliance in the parliament, now the CF, to form a new government that would rule the country for the coming four years.