Mangaluru, Sep 1: National Sports Day has been recognised every year on August 29. It is a day to commemorate the birth anniversary of the hockey legend Major Dhyan Chand Singh. His contribution towards the national game Hockey is spectacular. During his career he has scored 400 goals and won gold medals in Olympics in 1928,1934 and 1936. 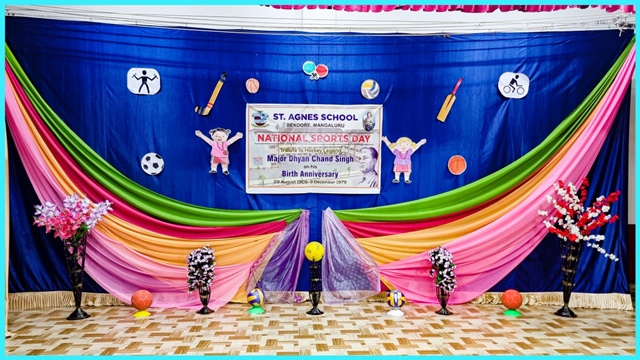 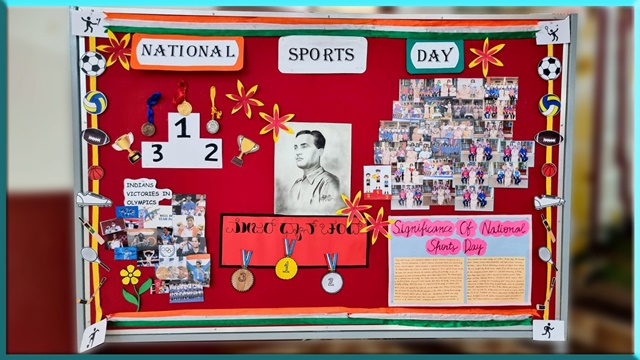 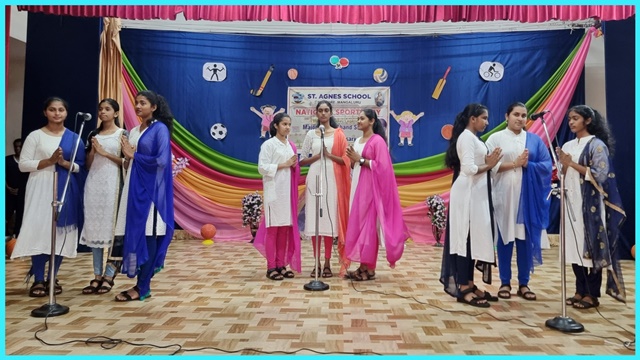 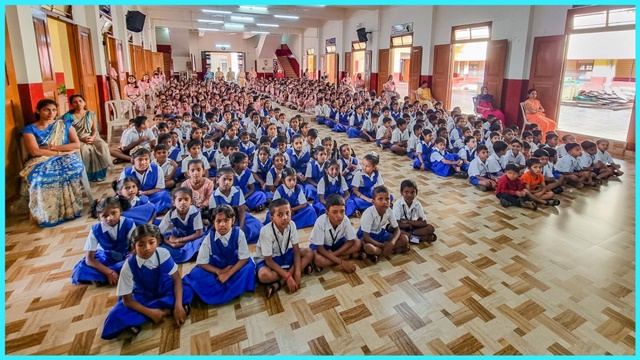 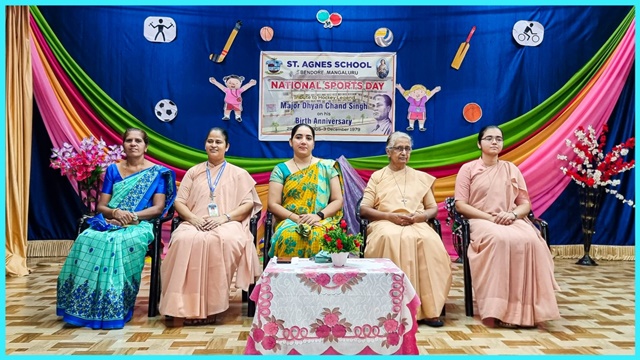 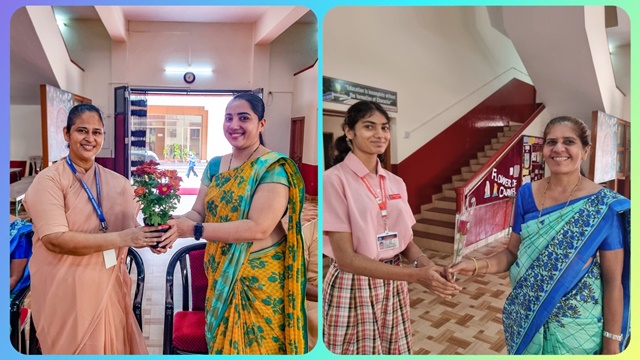 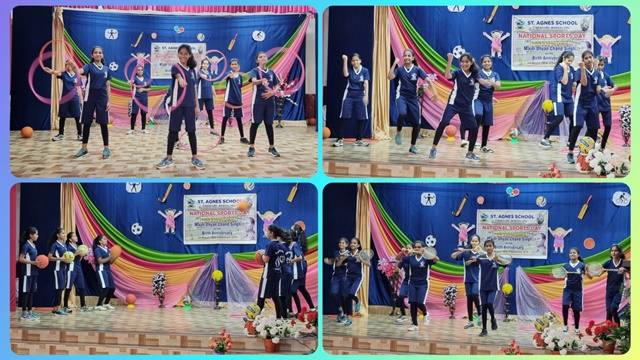 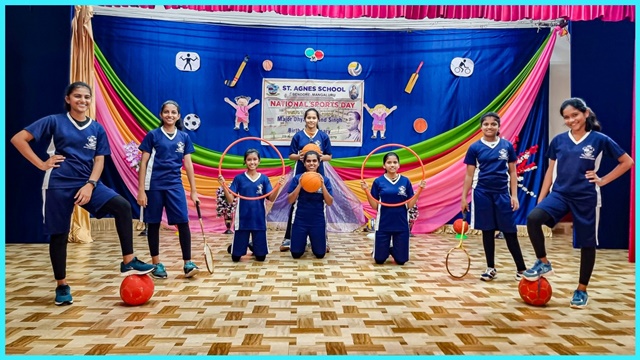 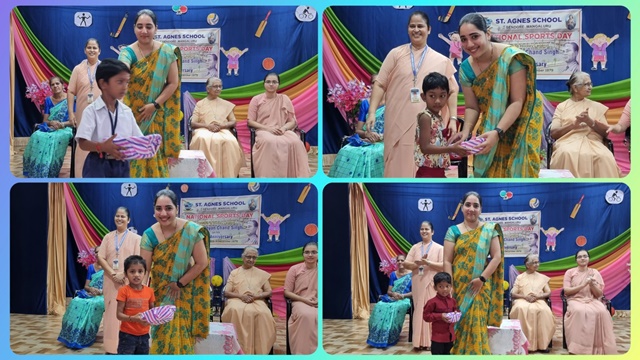 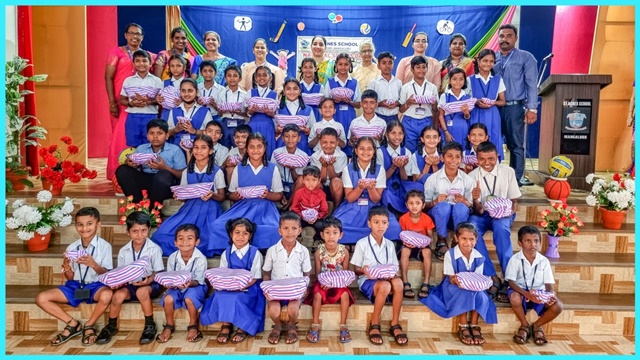 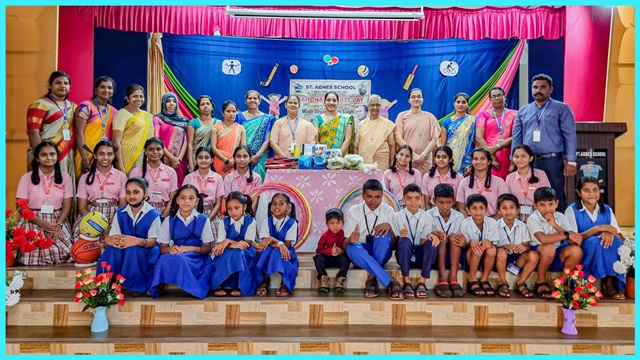 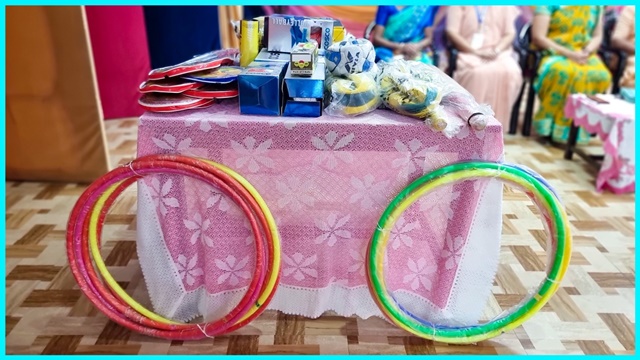 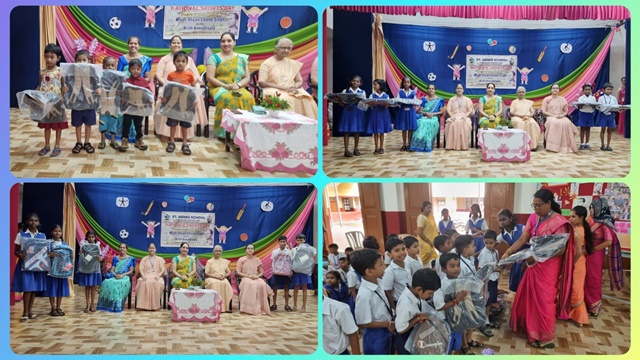 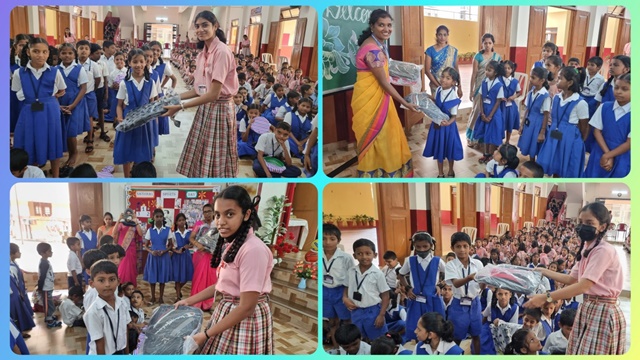 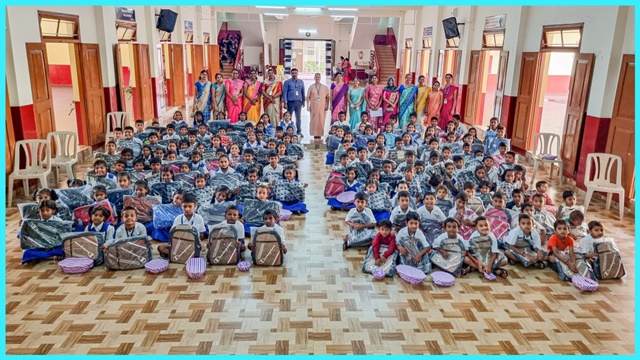 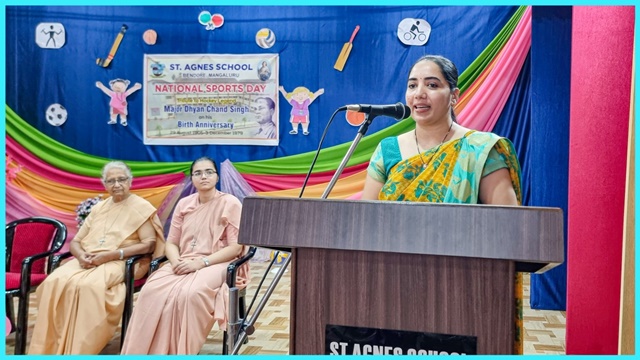 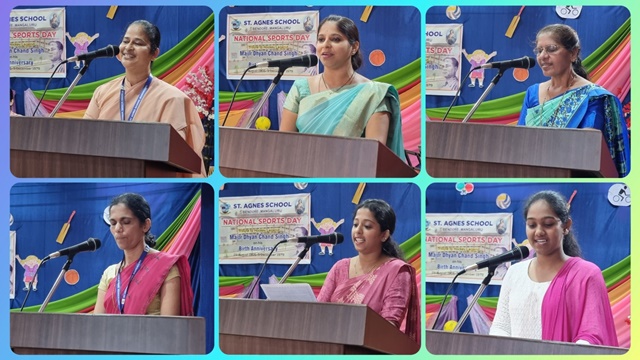 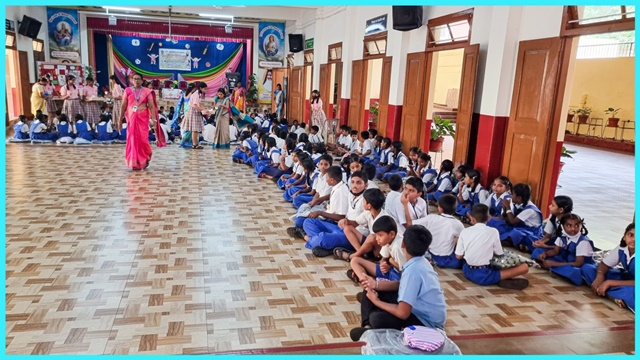 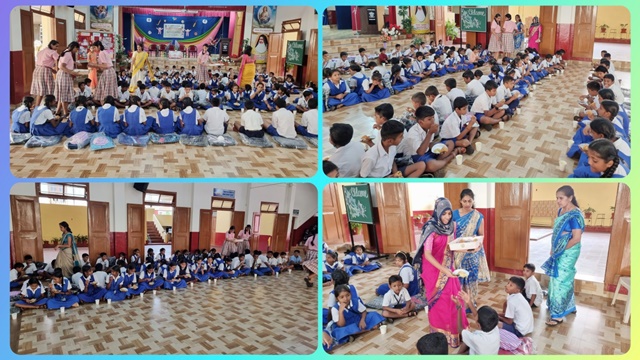 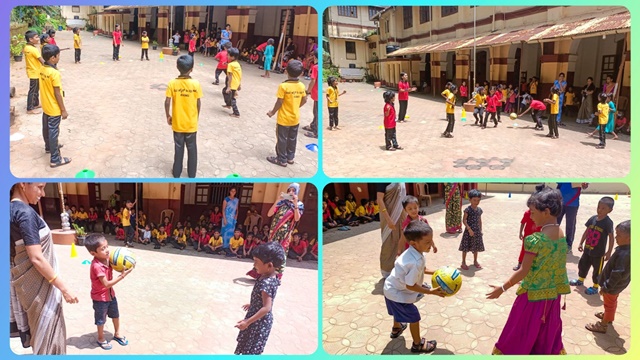 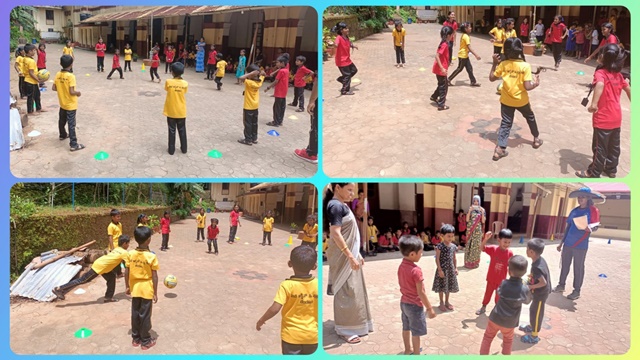 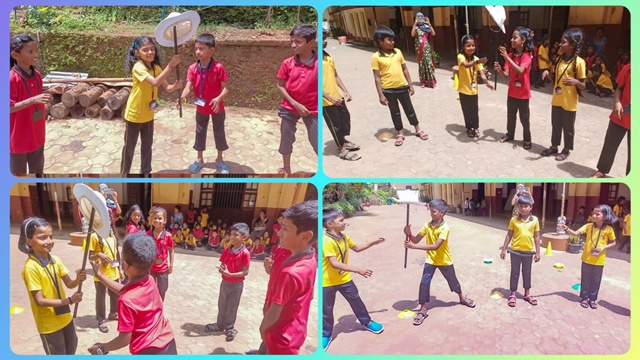 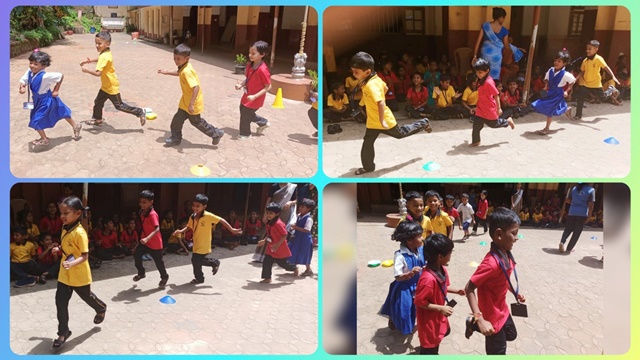 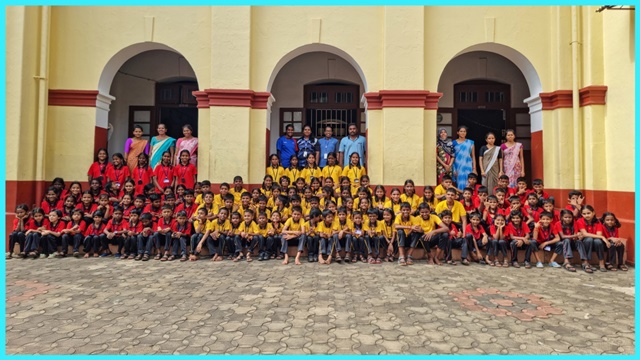 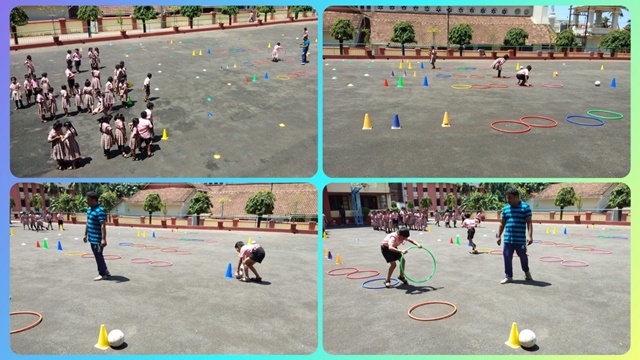 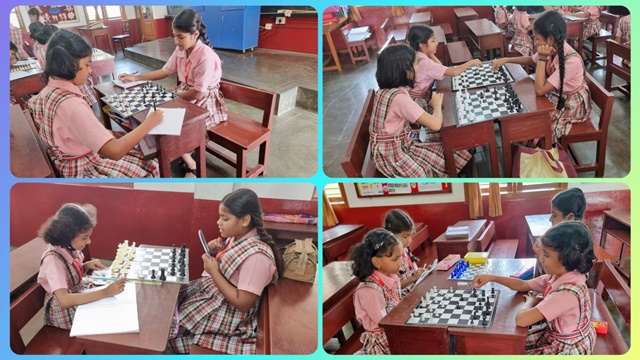 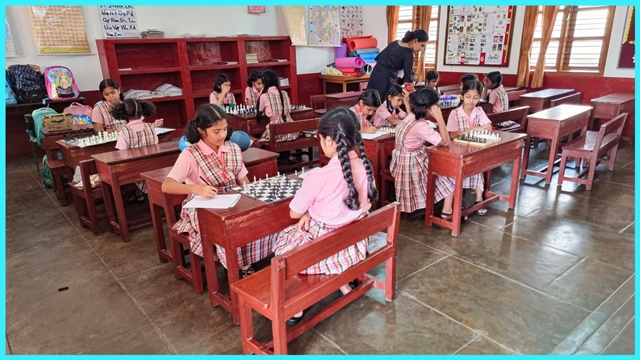 St Agnes CBSE school commemorated this day very eloquently. The chief guest was Reena Ranjith who is currently working as a guest faculty and research scholar of English Literature at Srinivas university. She is the receiver of international and national awards in Karate. Also given various sessions on Karate and self-defenceto various schools and colleges in and around Mangaluru.

This year the school recognised this important day by inviting the students of St Agnes Kannada Primary School. Around 150 students along with 12 teachers attended the same. A grand welcome was given to them followed by a meaningful prayer service. To mark the importance the students of St Agnes CBSE entertained them with dance on sports theme and several games were conducted spreading happiness among the children. Prizes were distributed to the winners. The CBSE School students contributed a sum of Rs 45,000, a charity initiative in the name of Mother Veronica from which the students of St Agnes Kannada Medium school were gifted with bags and sports equipment’s. A few sports items were also sponsored by Asian Sports Mangaluru.

The guest in her message emphasised the need of sports along with academics. She gave her life example of being interested in Karate and how she had achieved success was shared to the students. She also pondered a few thoughts on Hockey legend Dhyanchand.

The principal in her speech spoke a few things about Major Dhyanchand. She encouraged students to build up love for sports and continue to practice until it is mastered. Expressed her gratitude to everyone for making the event a success and for the parents of CBSE school for their generous contribution.

Teacher Jacinta Pinto of St Agnes Kannada Medium school also gave a few words of enlightenment on National Sports Day and thanked all for inviting the students and teachers and making it a grand success.

The programme was hosted by teacher Priya. The gathering was welcomed by Rachel of grade X. Teacher Dora announced the names of the winners. Teacher Chandrika proposed the vote of thanks showing gratitude to all for their brilliant participation. Refreshments were served towards the end of the programme.