New Delhi, Nov 11 (IANS): Amid allegation by the opposition parties that the BJP is misuing Raj Bhavan, the BJP accused former Prime Minister Rajiv Gandhi of misusing the Union Cabinet and Governor's office to dismiss the elected governments. 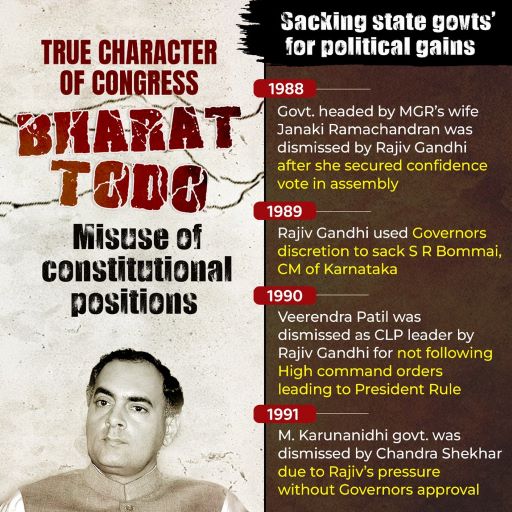 The Congress had also raised questions on the role of the state governor in toppling the Uddhav Thackeray government in Maharashtra.

On its official Twitter account, the BJP accused Congress of being responsible for dividing India, alleging that M.G. Ramachandran's wife Janaki Ramachandran's government was dismissed in 1988 despite proving majority in the Legislative Assembly, and Karnataka Chief Minister S.R. Bommai was sacked in 1989 by 'misusing' the Governor's office.

The BJP further alleged that despite not being in power in 1991, Rajiv Gandhi pressurised Chandrashekhar, the then Prime Minister to sack the Karunanidhi government of Tamil Nadu without the Governor's consent.