The contingent has 144 youth soldiers of the navy and a tableau of Narishakti. Three women officers and five Agniveer men will also be part of the contingent. Sub Lt Valli Meena will also accompany Lt Cdr Disha Amrith.

Disha is daughter of Amrith Kumar and Leela Amrith couple, residents of Tilak Nagar near Boloor in the city. She had the vision of becoming a naval officer right from her childhood. She completed her education till PUC from primary in Canara educational institution. She joined the NCC in high school itself. As there was no NCC unit in Canara during that time, she used to get trained in St Aloysius College. 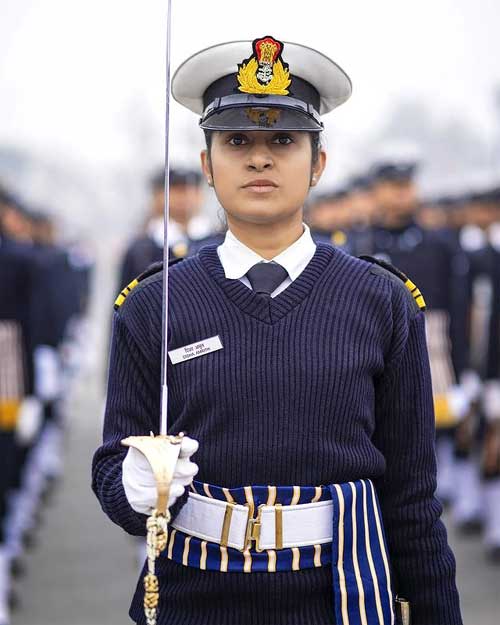 Later, while studying BE in computer science at BMS College Bengaluru, Disha took part in many eligibility examinations of Indian Navy. Though she failed in some attempts, she did not give up her vision and dream and got recruited as Dornier aircraft air operation officer in Indian Navy. At present she serves as Lieutenant Commander in Indian Navy at Andaman and Nicobar Islands.

Disha joined Indian Navy in 2016. After finishing the training she was deputed at Andaman and Nicobar in 2017. She also flew Dornier aircraft and took part in some missions.

Lt Cdr Disha Amrith said, “I was dreaming to participate in the Republic Day parade from 2008. Now the Indian Navy has given me the opportunity. I wanted to join Indian Navy right from my childhood. My parents are my inspiration. My father also wanted to serve in the Indian Navy. But he could not fulfil his dream. Now I feel proud to have accomplished his dream.”

Amrith Kumar, father of Lt Cdr Disha Amrith said, “I am very happy that my daughter Disha is selected to lead the naval contingent on Republic Day Parade. I and my wife had lots of interest in navy. But during our time we could not join. Now our daughter has fulfilled our dreams.”